Once you have played Teotihuacan a few times, you may want to use an alternative method of receiving your Starting tiles.

Please note, however, that this variant is recommended only for players with both a solid grasp of the rules and enough experience to be able to form a strategy from the first moments of the game.

This means that the last player will draft 2 Starting tiles in succession. After each player has drafted their Starting tiles, proceed with setup normally.

In a regular game of Teotihuacan, players should always have ample time to prepare for an Eclipse. However, if you wish to play a more cutthroat version of the game, you may use the alternate rules below.

Note: We do not recommend this variant to any but the most competitive gaming groups who also favour negative interaction. 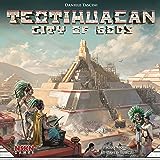