Dead of Winter is a meta-cooperative strategy board game about surviving through a harsh winter in an apocalyptic world. Players are faction leaders who must work together toward one common victory condition, but each individual player must also complete their own secret objective. Often this secret objective requires that a player help complete the colony objective.

The game is played over a set of rounds, during which the players will execute actions like scavenging locations for supplies, attacking zombies and other survivors, moving, using medicine, building barricades or helping to complete the existing crisis.

There are 20 possible scenarios to play and each scenario has a different starting morale level, zombie presence, game length and a unique colony victory objective. Place the colony board in the center of the play area and place the 6 location cards around it as shown or as best accommodates your table. Each player collects a player reference sheet. …

Cards of Dead of Winter Variant Rules for Dead of Winter

Players may choose to play the game cooperatively. Use the hardcore side of the main objective card and do not assign secret objectives. Each player's only objective is to complete the main objective. Players cannot vote to exile a player. During setup, remove from the game every card showing the non co-op symbol on the bottom right corner of the card.

Follow the same rules as the Co-Op Variant. When setting up each player receives 7 starting item cards instead of 5 and receives 4 survivors and keeps 3 of them instead of keeping only 2 of them. … 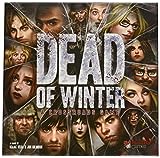