Agricola means farmer in Latin, so no surprise that the game is about farming.

The game is a standard worker placement game, so you send your works to do different farming tasks on the board.

They can gather wood, plow, sow fields, get animals to raise, spend resources to build rooms, bake breads, etc. Yes, you will need to organize a lot in this game.

When there a harvest, you have to feed your family members and collect the crops on your fields.

Your animals will produce offspring if you have more than one and enough space for them. Like this you let your farm grow and evolve. You will add fences, fields or build improvements.

The board represents your farm and have 15 spaces. Two tiles are placed to representing a two room wooden house.

In the center of the play area, 4 boards are placed. One holds 12 major improvement cards that may be purchased with resources such as clay ovens or cooking hearths. Another one contains actions that players may play. Two boards keep track of round progress and also contain actions.

You start with two family members (the farmer and his wife). This means you have two workers and can do only two actions per turn.

But don't worry, there is the 'family growth' action that allows you to expand your family with kids early on. By this, you can get more work accomplished but you first must expand your house for it.

Once all family members have performed an action, all players get their works back and the next turn can start by revealing a new action card.

The first action available to you is taking resources. There exist several resources in the game, and wood, reed, stone, clay, as well as sheep, pigs and cattle all accumulate. If you don't take them during a round, more will be added. There are also resources that never accumulate like wheat and vegetables.

To grow crops, you require the plow action which allows you to add a field tile to your farm. When you have something to plant, you can use the sow action to place a plant on the field or add a few more on top of it.

When you want to raise animals, you have first to build fences and stables using the appropriate actions with lots of wood.

After turn 14, the game is over and all players score their farms. Points can be score for almost everything you have: every crop and animals, the fields, pastures, family members, stables, house, improvements, etc. The only thing that don't offer you points are the spare building resources. You also lose points if there are undeveloped spots on your farm or when you didn't engage in several scoring categories. The player with the most points wins the game.

The game is not so easy to learn. But once you are through the initial learning curve, the game play is quick but complex when you play versus hardcore players. That's why Agricola attracts a certain type of gamer. The type that loves analyzing the game's system for sources of action optimization. The game is a strategy game and is not based too much on luck.

Agricola supports different levels of difficulty. It is varied by using or not using the Minor Improvements and Occupations cards. To beginners, we advice them not to use them. When you start to know the game, you can add decks. There are 3 decks (basic, interactive and complex). You can use them to add more levels of depth and variety to the game.

It's possible to play Agricola solo. For this, you play a campaign of eight turns. This is excellent to learn the game if you are a beginner.

Agricola is designed by Uwe Rosenberg and first published in 2007 by Z-Man Games. Uwe Rosenberg also created other board games like Le Havre, Ora et Labora and Caverna. Players start the game with a farming couple living in a simple two-roomed hut. During the course of the game, these families have abundant possibilities to improve their quality of life by building up their home, improving their fields and breeding their animals. â€¦ As the game suggests, you should avoid earning begging cards at any costs: The -3 penalty for being short for each missing food is quite steep. Sometimes it feels there is a choice between taking begging cards and keeping that grain for sowing or that pair of sheep for breeding.

In these situations it is almost always better to feed your family and wait for an opportunity later to get your farm operating. The only time you can safely take begging cards is if you have the Mendicant occupation. â€¦

Agricola Farmers of The Moor

Agricola: Expansion For 5 & 6 Players Board Game 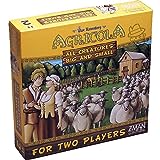 Agricola All Creatures Big and Small 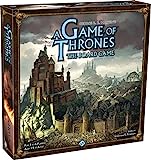 Agricola Farmers of The Moor

Agricola: Expansion For 5 & 6 Players Board Game