In the Year of the Dragon Fan Site

Stefan Feld's 3rd game by Alea is In the Year of the Dragon.

Players take on the role of Chinese rulers around the year 1000. The game plays out in twelve rounds, with each round representing one month in a year that seems to go from bad to worse. Disease, drought, and attacks from the Mongols may claim lives, but make sure you have enough money to offer a tribute to the Emperor.

The game play is easier than it may appear. Every player has a set of "person" cards. Each round, you choose one action (most of which call on your workers' abilities) to help you prepare for the months ahead. Then you play one person card, recruiting that person and placing him into one of your palaces.

Each person brings different skills and abilities to help you ride out the year. (Farmers help you gain rice to survive a drought month, Tax Collectors raise money, etc). At the end of each round, that month's event is triggered, which may cost you some of your workers, some money, or give you points.

Careful planning is the key to surviving "the year of the dragon", but survival alone may not win you the game.

In the Year of the Dragon: The Great Wall of China & The Super Events
Treasure Chest

In the Year of the Dragon Game Rules In this game, each player takes on the role of a Chinese prince, seeking to maximize the prosperity and prestige of his province in the ancient China of approximately 1,000 A.D.

To assist in these endeavors, the princes must call upon the diverse talents of their courtiers, from scholars and monks to warriors and craftsmen.

These loyal subjects will lend their expertise to the struggle to shield their rulers from the often disastrous consequences of the myriad untoward events that plague the populace from month to month. Be it drought, contagion or Mongol invasion, only foresight and planning will spare the princes and their subjects from these fates. … 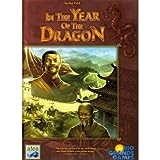 In the Year Of The Dragon

In the Year of the Dragon Expansion