Le Havre is a economic city development board game where the players are attempting to acquire and refine goods to ship off. The game takes place in the harbour of Le Havre, a French city.

Each turn, goods are first added to various offer spaces. The goods are used either to feed the community, to construct buildings and ships or to be processed in one of the 33 buildings. Here, the goods are upgraded into finished products which players can sell.

There are 5 types of buildings: craftsman's buildings, economic buildings, industrial buildings, public buildings and non-buildings. They are all a good investment and a revenue stream, but ships provide necessary food that is needed to feed the workers.

Wood, clay and iron are building resources while fish, grain and cattle are used as food.

The game is played for a set number of rounds and at the end, the player with the greatest net wealth is the winner. Le Havre can be played in either a full or a shortened version. Rule changes for the shortened version are described at the end of this section. The following table shows how many rounds are played, depending on the number of players: …

As with all the other buildings that are owned by the town, face-up Special buildings can be bought by players but they cannot be built (Similar to the Clay Mound and Black Market; an exception is the Football Stadium). How Do I Get Money

Money (identified by the coin symbol) is used to buy buildings and ships, to repay loans, as a substitute for food and, last but not least, to win the game. The currency is called Francs.

Note: A player can only take out a loan if she or he does not have enough food during a Feeding phase or if she or he cannot pay required Interest costs. … 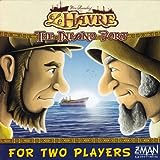