Le Havre can be played in either a full or a shortened version. Rule changes for the shortened version are described at the end of this section. The following table shows how many rounds are played, depending on the number of players:


*We only recommend the 5-player game for experienced "Le Havre" players.

During the Round stage, players play a fixed number of rounds (depending on the number of players). A round consists of 7 individual player turns and, following those, the resolution of the applicable Round card.

In the Final stage of the game, each player carries out one final action. Afterwards, the players count their wealth. The player with the largest fortune wins.

The Starting Player is the player who lives closest to water. This player takes the Starting player tile. After his turn, players take turns in clockwise order around the table.

During each player's first action, new goods arrive in the harbor and are placed on the corresponding Offer space.

The player taking the turn places his Ship marker on the next free Supply tile (in the direction of the arrow). In the first round, the Supply tiles are face-down until they are occupied; once they are occupied, they are turned over and remain face up until the end of the game, without changing their position.

Two different tokens are shown on each Supply tile (Goods or Francs). The player takes 1 token from each of these Supply spaces and places them with the standard side up on the appropriate Offer spaces. The border on the goods token shows which is the standard side.

The turn in which a ship is placed on the seventh Supply tile is the last in a round. At the end of this turn, the current Round card is resolved and turned over. After this, the first turn of the following round begins with the next player's Supply action on the first Supply tile.

Interest for Loan cards: The word "Interest" is written on one of the seven Supply tiles. Whenever any player places a ship on this tile, all players who have taken out a loan must immediately pay exactly 1 Franc in interest, irrespective of the number of loans they have. A player who cannot pay this Franc must either sell a building or ship or take another loan card and must then pay the 1 Franc.

The Main action is mandatory, and follows the Supply action. The player whose turn it is chooses one of the two Main actions: Take goods from an Offer space or Use a building action.


Main Action A: Take goods from an Offer space

The player takes all tokens (Goods or Francs) from one of the seven Offer spaces.

There is no limit to the size of a personal supply. All goods and Francs are placed face up and may not be concealed from the other players.


Main Action B - The Building Action

Entering a Building: Most of the building cards allow visitors to take an action, (e.g. to build additional buildings) or to convert standard goods to upgraded goods. To use a building's action, a player must enter the building; that is, move her Person disc to an unoccupied building.

A player may enter buildings that are owned by the town or by any player.

Buildings are explained on page 6 and in the Buildings overview.

Entry Fee: There is often a fee to use another player's building; this is shown at the top right of the Building card (between the building costs and the Sort order number). It must be paid to the owner of the building, either in food or in Francs, before the building can be entered and used.

If food and money costs are separated with a /, a player only pays one of the two costs.

A player may never enter a building if she is unable to pay the entry fee.

A player entering a building must carry out the building's action.

Note: In this game, Food can always be replaced 1:1 with Francs. Francs can, however, never be replaced with food.

In addition to the Supply and Main actions, a player can buy one or more Building and/or Ship cards at any time during his own turn (even before taking the Supply action or Main action).

Ships: Only the topmost face-up card on each ship pile may be purchased. The cost of each ship is higher than its value and - as on the building cards - is indicated below the value.

Note: Ships can be purchased even if no-one has built a wharf yet: wharves are only required to build ships.

Buildings and Ships may also be sold to the town. These actions may even be taken during another player's turn, but not while she is taking an action. Buildings and ships are sold for half of their value. When a player sells a building, it is placed with the other buildings that belong to the town. When a player sells a ship, it is placed on top of the pile of Ship cards of that type.

Person discs on buildings are always returned to the player when the building is bought or sold. (The people are sent home).

Buildings may not be sold and then bought again in the same game turn.

Buildings and ships may not be sold to other players.

The required building materials are shown at the top of the building card (and are repeated at the bottom of the card as well).

Further explanations of the building cards are included in the Buildings overview, which contains a full listing of all building cards.

Ships reduce the amount of food that their owner must pay at the end of each round.

At the end of each round, when the Round card is turned over, a new Ship card is introduced into the game. These ships may be built at one of the Wharves (one ship per visit).

To build a Ship, a player pays any required entry fee to the owner of the Wharf and then pays the building resources and 3 energy that are required to build the ship (see Ships on the reverse side of the Round cards). Players generate energy from wood (which may be upgraded to charcoal) or coal (coke).

Special Case: The first player to build a non-Wooden ship at a particular Wharf (an Iron or Steel ship or a Luxury liner) must modernize the Wharf by placing 1 brick on it. The brick remains on the Wharf for the remainder of the game to show that the Wharf has been modernized for all players. Only a player who is building a ship may modernize a Wharf. A player need not own a Wharf to modernize it.

Ships are very important! In this game, long-term planning to meet food requirements is immensely important. A player who does not take much grain or cattle at the start of the game should build or even buy a ship early in the game - otherwise, it is possible that she will spend much of the game just trying to get food. In the long term, building ships is important for every player. The game essentially cannot be won without ships.

Each player must pay the amount of food shown on the Cooking pot symbol on the Round card. Ships help with this requirement: Each ship that a player owns reduces the amount of food that he must pay by the amount shown in the table on the ship card. A player who does not have enough food must choose either to sell buildings or to take a Loan card (or cards).

Remember: Each Franc counts as 1 Food. Players can pay all or part of their food requirement in Francs.

When players build ships, they receive Food production tokens that indicate the amount of food they receive each round from their Ship cards.

Even if a player's ships provide more food than must be paid, or if a player cannot pay the right amount of food (e.g. by paying with a "meat" token), she may not take the excess food.

symbols on some Round cards indicate that a building or special building card must be added to the town's buildings.

If a normal building is required, take the card with the lowest sort order number (top right corner) from the Building Proposals.

Finally, the Round card is turned over to show the ship on its reverse. Place it on the pile of Ship cards of that type (see Game Board 3).

The next player in turn begins the next round.

The Round Overview card gives an overview of all the Round cards. The first row on the card shows the Round number in a brown circle.

The second number - below the Round number and in a cooking pot - shows the amount of food that each player must consume at the end of the round.

The third line indicates whether a Standard or Special building is to be built at the end of the round, or whether the Harvest does not occur.

The fourth and fifth lines show which Ship card will be introduced to the game when the Round card is turned over: for example, "2" and "Wood" means a Wooden ship with a value of 2 Francs.

The Round stage ends when the last Round card is resolved. The Final stage begins.

Each player has exactly one more turn and carries out a Final action - a Main action (see page 5). Supply and Buying actions may not be taken, and Interest is no longer paid. Players may still repay loans and sell buildings and ships.

The Starting player begins, then each other player takes a turn.

Note: In the Final stage only, Person discs may be moved to buildings which are already occupied by one or more other Person discs. Each player, therefore, has the chance to visit one building of his choice during the Final action. The only building that may not be entered is the one that the Person disc is already on.

The game ends immediately after the final actions. The richest player is the winner.

A player's wealth is calculated by adding:

Goods in a player's supply have no value (exception: the Storehouse). If there is a tie, there are several winners. 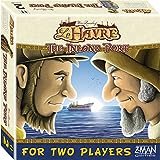