In a hole in the ground there lived a Hobbit. This Hobbit's name was Bilbo Baggins, and his hole was a pleasant, comfortable hole named Bag End, near the village of Hobbiton.

Hobbits, as perhaps you already know, are small, quite jolly creatures, perhaps half the height of a human, extremely fond of food and drink, and not at all fond of adventures.

But adventure came to find Bilbo, in the form of Gandalf the Wizard, with 13 Dwarves in tow. The Dwarves, led by Thorin Oakenshield, were intent on recapturing treasure which had been stolen from them many years before, and which is now being guarded in a cave in The Lonely Mountain by a fierce dragon named Smaug.

The Dwarves planned to enter the Lonely Mountain by way of a secret door in the side of the mountain, and then to employ the services of a burglar to spirit away such treasure as can be recovered.

To Bilbo, this all sounded rather suspiciously like an adventure. To the Dwarves, Bilbo didn't seem to be quite the sort of person they had in mind to help them. But Gandalf merely laughed and smiled, and soon enough the strange party were setting out, quite against Bilbo's better judgement!

The adventure began almost immediately, when Bilbo and all 13 Dwarves were captured by three trolls. Gandalf tricked the trolls into quarreling until the sun came up, turning them to stone!

Next they arrived at the Elves' stronghold, Rivendell, where they met the Lord of the Elves, Elrond. After taking his advice they headed for the Misty Mountains, where they ran afoul of Goblins that drove them underground. Gandalf again came to the rescue, but Bilbo was separated and lost in the dark!

While lost in the darkness, Bilbo came across two things that would change his life forever. The first was a simple gold ring. The second was a strange, fish-eyed creature named Gollum. Bilbo and Gollum engaged in a deadly game of riddles, with Bilbo the eventual winner, and Bilbo managed to escape by wearing the ring - which makes the wearer invisible, the first hint of its greater purpose and power.

Reunited at last, Bilbo and the Dwarves set off again, but this time they were pursued by Goblins and wolf-like Wargs and only just saved by eagles before being taken to the house of Beorn, a strange man who lived alone and attended by remarkable animals.

From thence they came to the Mirkwood forest, this time without Gandalf, and with a simple warning not to leave the path. Of course they did exactly that, and so were attacked by Giant Spiders and then captured by Wood-elves.

After a daring escape, again engineered by Bilbo, the party floated down a river inside barrels towards Lake-town, the human settlement near The Lonely Mountain- where Smaug still slept atop his pile of treasure.

They then set off to The Lonely Mountain and found the secret door that Gandalf had told them about. Bilbo crept through the door and stole a great golden cup from beneath the sleeping dragon, but soon afterward Smaug awoke! The dragon was enraged by the theft of his treasure, and scoured the mountain for signs of the thieves.

Discovering the Dwarves, ponies, he concluded that the men of Laketown were responsible, but not before Bilbo spotted a weak spot on the dragon's scaly breast. So it was that when Smaug descended upon Laketown, all fire and death, Bard the Bowman was able to shoot him from the sky.

The men of Lake-town and the elves of Mirkwood then mustered their armies and marched on the Lonely Mountain, believing that they, too, were entitled to some portion of the dragon's lair.

But Thorin would have none of it, desiring only the Arkenstone that was his family's special treasure. In an effort to broker peace, Bilbo snuck out of the mountain and delivered the Arkenstone to the men of Lake-town, but this only enraged Thorin further. Even Gandalf couldn't resolve the situation.

Suddenly, an army of Goblins and Wargs attacked the mountain, forcing the humans, Elves and Dwarves to band together to defend themselves. Thorin and his kin fought heroically, but all seemed lost until Beorn, in the form of a great bear, and the eagles arrived.

As Thorin lay dying from wounds suffered in the Battle of Five Armies, he finally forgave Bilbo, and he was buried with his precious Arkenstone. Bilbo received more treasure and wealth than he knew what to do with, and returned to Bag End a very rich Hobbit indeed…but his greatest treasure was the magic ring…

The Hobbit is a novel that tells the tale of a diminutive hero that, with the help of a group of stalwart dwarves, sets off to infiltrate Smaug's lair in an effort to plunder the dragon's vast hoard of treasure.

Now it's your turn to take on the roles of the dwarves, aiding Bilbo in his monumental quest to defy the odds and become a legend...

The Hobbit is a board game of adventure and treasure for 2-5 players. On his quest to the Lonely Mountain, Bilbo Baggins will need assistance and guidance from his stoic dwarf companions. As one of these dwarves, it is your responsibility to aide Bilbo on his journey and ensure that you recover the treasure that is destined for you.

The objective of the game is to be the player who accumulates the most treasure by the end of the adventure. Treasure is won through Adventure Cards, which are drawn when Bilbo enters an Adventure Space. Adventure Cards present players with a challenge that can be overcome by using the game's custom dice.

Bilbo's dwarven companions have three stats that influence their ability to complete Adventures: Cunning, Strength, and Initiative. Cunning allows the player to re-roll dice when resolving Adventure Cards, Strength provides a number of axes to Adventure checks, and finally Initiative determines which player draws the Adventure Card first and how many shields they will contribute to battle. 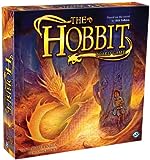