Victory! With the destruction of the Death Star, the Rebellion has given hope to a galaxy living in fear. Having lost their ultimate weapon, the Empire scrambles to recover in the face of this crushing defeat.

As the scattered fragments of the battle station rain down upon the Rebel base on Yavin 4, the Empire sets in motion a plan to seek retribution against Rebel forces stationed on the small moon.

Not long after, when an Imperial beacon begins to broadcast from an outpost some distance away from the Rebel base, a small team of elite operatives is dispatched; their mission: to silence the signal at all costs....

Star Wars: Imperial Assault is a strategy board game of tactical combat and missions for two to five players, offering two distinct games of battle and adventure in the Star Wars universe!

Imperial Assault puts you in the midst of the Galactic Civil War between the Rebel Alliance and the Galactic Empire after the destruction of the Death Star over Yavin 4.

In this game, you and your friends can participate in two separate games. The campaign game pits the limitless troops and resources of the Galactic Empire against a crack team of elite Rebel operatives as they strive to break the Empire's hold on the galaxy, while the skirmish game invites you and a friend to muster strike teams and battle head-to-head over conflicting objectives.

In the campaign game, Imperial Assault invites you to play through a cinematic tale set in the Star Wars universe. One player commands the seemingly limitless armies of the Galactic Empire, threatening to extinguish the flame of the Rebellion forever.

Up to four other players become heroes of the Rebel Alliance, engaging in covert operations to undermine the Empire's schemes. Over the course of the campaign, both the Imperial player and the Rebel heroes gain new experience and skills, allowing characters to evolve as the story unfolds.

Imperial Assault offers a different game experience in the skirmish game. In skirmish missions, you and a friend compete in head-to-head, tactical combat.

You'll gather your own strike force of Imperials, Rebels, and Mercenaries and build a deck of command cards to gain an unexpected advantage in the heat of battle. Whether you recover lost holocrons or battle to defeat a raiding party, you'll find danger and tactical choices in every skirmish.

As an additional benefit, the Luke Skywalker Ally Pack and the Darth Vader Villain Pack are included within the Imperial Assault Core Set.

These figure packs offer sculpted plastic figures alongside additional campaign and skirmish missions that highlight both Luke Skywalker and Darth Vader within Imperial Assault. With these Imperial Assault Figure Packs, you'll find even more missions that allow your heroes to fight alongside these iconic characters from the Star Wars saga. In the Imperial Assault Campaign Mode, two to five players take part in an epic Star Wars adventure. One player controls the forces of the mighty Galactic Empire, commanding everything from squadrons of Stormtroopers to iconic villains, such as Darth Vader. â€¦

This section lists additional rules that are needed to play the Tutorial. This includes using special abilities, suffering damage, and more.

Abilities provide special effects that can be performed above and beyond the standard rules of the game. For example, an ability may let a figure perform an additional attack or allow it to break the rules in certain situations.

Some abilities are prefaced by icons that function as follows: â€¦ There are a number of general rules that apply to all game modes, but are not needed in the tutorial. These rules are listed on this page.

Figures on the map represent characters, vehicles, and creatures controlled by the players. Some figures are plastic miniatures, while others are represented by cardboard tokens.

Figures on the map relate to each other in one of two ways: figures can either be friendly or hostile.

To start playing a new campaign, players first perform the steps of "Campaign Mode Setup" below. 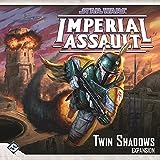 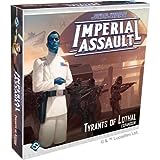 [DriveThruReview] #344: "The Shortening of the Way"

Imperial Assault and Twin Shadows Review - Is It Our Game of the Year? by No Pun Included