Qwirkle is an elegant tile game, easy to learn and understand, visually inviting, and increasingly challenging as the game progresses. The game can be played by 2 up to 4 players and an average game takes about 45 minutes to play.

The game consists of 108 wooden blocks and they display one of six shapes (circle, square, diamond, starburst, clover and "x") in one of six colors (blue, red, yellow, green, purple and orange). There is no board, players simply use an available flat surface.

Players begin the game with 6 blocks which they hide from other players. All other tiles go into a big bag that's shaken up to mix everything together. Players take turns, adding to an increasingly complex grid of blocks. To place a block, it must be either of the same color or shape as the adjacent blocks. You can place several blocks, as long as they are in one line without duplicates.

If you are fortunate enough to complete a six tile row, which is called a Qwirkle, you receive 6 extra points.

Players score one point for each block played plus all blocks adjacent. It is possible for a block to score in more than one direction.

The player then refills his hand to 6 blocks and the next player continues.

The game ends when the draw bag is depleted and one player plays all of his remaining blocks, earning a 6 point bonus. The player with the high score wins.

Tactical maneuvers and well-planned strategy is required to win a game. As more tiles are placed, there are more choices, so the search for the high scoring play becomes more and more complex.

The game offers a risk-award concept. You could get a bunch of points creating a line of five, but lines of five are susceptible for another player to add the sixth tile for a Qwirkle while simultaneously making a new line for even more points of top of the 12 points they're already going to get for the Qwirkle.

The challenge is both visual and logical and complex enough for serious adult competition. The strategy is deep, but accessible.

Another strength of Qwirkle lies in its familiar look. The shapes and colors are easily recognizable and the rules are very simple and quick to learn.

Qwirkle will satisfy anyone who enjoys games like Scrabble, Carcassonne or Ticket To Ride. Create and expand lines of color and shape strategically in order to score the most points.

You need a paper and pencil to keep the score.

Place all the tiles in the bag.

Each player draws 6 tiles and places them that no other player can see them. This is your deck.

Find the player with the most tiles sharing one characteristic. That player plays those tiles in a row or column and the number of tiles is the score for that first turn. â€¦

Players try to form as many Qwirkles as possible with their cards.

A qwirkle is a series of 6 cards which are:

The one who succeeds in forming the most Qwirkles wins the game.

Shuffle the cards well. Each player is dealt 9 cards, face down. Place the rest of the cards face down in the middle of the table, to form the draw pile. â€¦

Qwirkle Connect adds bonus point opportunities to Qwirkle. You will need a keen eye - and the right tiles - to get the bonuses and maximize your score. Qwirkle Connect is a part of Qwirkle Trio.

Use the green side of the boards. Arrange the game board quadrants to make one large square board. The board quadrants can be combined in many ways. The illustration below shows the recommended set up for your first game. â€¦

Build lines of color and shape strategically in order to score the most points.

You need a paper and pencil to keep the score.

Place all the cubes in the bag.

Each player draws 6 cubes and rolls them to create their deck.

Everyone plays open-handed with all of their cubes showing at all times.

The oldest player opens the game.

On his first turn (after rolling), the first player is required to place the maximum cubes he can. â€¦

Qwirkle Select adds an extra element of strategy to Qwirkle with powerful star tokens that allow you to take a tile off the board and add it to your hand Qwirkle Select is a part of Qwirkle Trio.

Use the blue side of the boards. Arrange the game board quadrants to make one large square playing board.

Put the quadrants together so the four thickbordered squares are in the center of the board. â€¦

The object of the game is to make the most Qwirkles.

Shuffle the cards thoroughly. Deal 9 cards to each player. Put the remainder of the deck to one side of the play area. The player with the largest set of cards that are all one shape or all one color, without duplicates, goes first. If there is a â€¦ 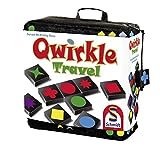 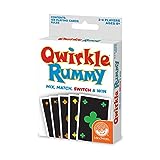 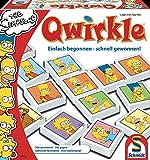 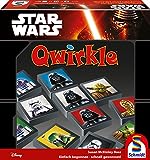 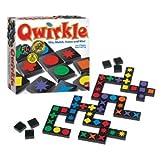 is a Board Game Everybody Should... (review)

How to Play Qwirkle - Rules Walkthrough