The woods are old-growth, dappled with sunlight. Delicious mushrooms beckon from every grove and hollow. Morels may be the most sought-after in these woods, but there are many tasty and valuable varieties awaiting the savvy collector.

Bring a basket if you think it's your lucky day. Forage at night and you will be all alone when you stumble upon a bonanza. If you're hungry, put a pan on the fire and bask in the aroma of chanterelles as you sauté them in butter. Feeling mercantile? Sell porcini to local aficionados for information that will help you find what you seek deep in the forest.

Morels, a strategic card game for two players, uses two decks: a Day Deck (84 cards) that includes ten different types of mushrooms as well as baskets, cider, butter, pans, and moons, and a smaller Night Deck (8 cards) of mushrooms to be foraged by moonlight. Each mushroom card has two values: one for selling and one for cooking.

Selling two or more like mushrooms grants foraging sticks that expand your options in the forest (that is, the running tableau of eight face-up cards on the table), enabling offensive or defensive plays that change with every game played. Cooking sets of three or more like mushrooms - sizzling in butter or cider if the set is large enough - earns points toward winning the game. With poisonous mushrooms wielding their wrath and a hand-size limit to manage, card selection is a tricky proposition at every turn.

Following each turn, one card from the forest moves into a decay pile that is available for only a short time. The Day Deck then refills the forest from the back, creating the effect of a walk in the woods in which some strategic morsels are collected, some are passed by, and others lay ahead. You stand in the middle of the forest and take in a deep breath of fresh air. You can feel that today must be your lucky day. Over the last week sunshine and rain have taken turns to create the perfect environment for a luscious harvest of savory mushrooms.

Advice from the local populace is also giving you a boost in confidence. Equipped with a large basket, you started early in the day - before dawn under the glow of moonlight. You even packed a pan, some butter and cidre so that the reward come nightfall will be a feast around your campfire of all the savory mushrooms you have gathered. It is going to be a beautiful day! â€¦ 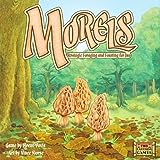 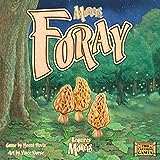