Alexandros is an abstract strategy by Leo Colovini, thematically inspired by the military expansion of Alexander the Great. It includes the "triggered scoring for all" mechanism, which can be considered a trademark of the designer, implemented in many of his games. It forces players to evaluate their actions in relation to what other players can earn.

The goal of the game is to have more points than other players when the trail/border markers are depleted or someone scores 100 points first.

Gameplay is driven by cards, used for all actions. Clockwise, players are first obliged to move the figure representing Alexandros across a triangular grid. They do this by playing cards with symbols matching those on destination spots.

This is the core concept of the game - when the figure of Alexandros is moved, it leaves a trail of borders behind it. Soon, these borders begin to form provinces composed of triangular spaces: either with symbols or empty.

After moving Alexandros, players either build their hand of cards by drawing them, take over provinces or trigger scorings if the situation on the board suits them.

Players can occupy provinces by playing cards from their hand and placing tokens representing their leaders on spaces with corresponding symbols. When a scoring is triggered, provinces earn points equal to the number of empty spaces in them

Players can take over empty provinces and/or those occupied by other players. Each player has only four generals and placing them costs valuable cards - the game requires careful hand management and point-to-point movement - to create worthy provinces for scoring. 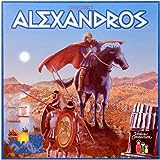 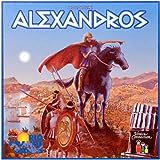