WHATZIT? are cunningly disguised names, phrases and sayings that are turned around, upside-down, sideways or jumbled up.

You need to work out the hidden word or phrase on each card. It could be the size, position or direction that will give you a clue. Sometimes, the pictures combined with a word or a number will give you your answer

In 'Whatzit?' the object is to solve rebus-like puzzles. (PLAY PLAY might be "double play") The roll of a die determines if you play solo, against everyone, or challenge a specific opponent. The winner moves the roll of a d6. Special spaces allow you to take a shortcut by solving a tougher "Wicked Whatzit". First to the top of the board wins.

The Rose Art edition of the game has new puzzles. The puzzles are divided into three categories of difficulty. The more difficult the puzzle, the more points it is worth. Four puzzles from each category are placed randomly in a the three by four frame. Players must solve puzzles which are orthogonally to the previously solved puzzle. The first player to reach an agreed to number of points is the winner.

Known as WHATZIT? in the USA and Canada, KATCH-ITS in Australia/NZ and DINGBATS in the UK and rest of world, are syndicated internationally, in newspapers, best-selling books and TV shows. Whatzit can be played by 3 to 6 players. If there are more than 6 players, form teams. Each team plays with one pawn and works together to solve the Whatzits.

Choose a pawn and place it on the Starting Square of the gameboard. All players do the same. Place the timer and dice within reach of all players. … 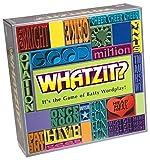 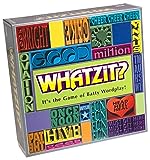