Many great scientists, with their theories and ideas, change our perception of the universe: Galileo Galilei, Copernicus, Kepler, Bacon and, above all, Sir Isaac Newton.

In Newton, players take the role of a young scientist who wants to become one of the great geniuses of this period.

To do this, they travel around Europe, visit universities and cities, study to discover new theories, build new tools, and work to earn money.

The game is played over six rounds. Each round, every player plays five cards from their hand, with each played card allowing the player to perform one of the game's actions. An action has a variety of effects, which depend on the symbols of that action visible on the board.

At the end of the round, a player can take back all the cards played except one. One card has to be left on the board, which means that you give up one possibility of doing that action, but also that the action will be carried out with greater strength.

Fortunately, you can acquire new cards that will allow you to perform more actions and with additional powers.

After six rounds, you calculate your final scoring, and the player with the most VP wins. The Eighteenth Century is a time of great scientific discoveries, as well as exciting research into mysterious and as yet unknown fields.

Competition in the academic world is ruthless... above all for young scholars such as yourselves! In order to follow in the steps of the great Newton you must devote yourselves to undertaking new research and increasing your knowledge in order to become the most highly respected scholar in the world's scientific community!

You will travel through Europe visiting cities, universities and ancient lands which were once seats of vast and mysterious knowledge. â€¦

Specialization tiles allow you to gain a bonus of an Income tile or Development tile.

When and only if, one of your Students (on the Technology track) or your Marker (on the Work track) finishes their movement on a Specialization tile, take the corresponding tile (the shown Income or Development tile) and place it on your Study board (a tile with the ? symbol indicates a tile of the kind of your choice. Once chosen it cannot be changed).

Development tiles are symbols which are added to the Basic Action shown on the tile. You need them to increase the value of that action every time that you perform it! â€¦

Each Master has a special power and gives Victory Points at the end of the game.

Master cards can be played in 4 different ways:

When you play a Master card, place it next to your Study board. If there is an immediate effect, shown by the lightning symbol, perform the effect immediately. â€¦

The Special Effects of Action Cards

Action cards which are not Starting Action cards always have a special effect which is shown in their upper half. 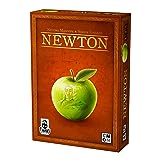