If you are learning Krakatoa for the first time, simply skip the blue rules. You can come back to them once you have mastered the basics.

Before actual play begins, there is a "throw-off" to see which player will start the game. Each player throws any set of 3 dodecas of the same color. The higher-scoring set goes first.

The players re-throw in the case of a tie. The scoring combinations are shown below; any combination not depicted below is a Bust and is worth 0 points.

A complete game consists of six rounds. A round consists of each player making 5 throws in a specific sequence, while the other player keeps score. Then the player with the higher total score starts the next round.

After each of your 5 throws, you announce your score for the throw and any bonuses (see Bonuses below).

The other player adds this score to your total and records it in the box for that throw, records the bonuses (x or xx) in the box for the next throw, and then announces your new total score.

For each throw, you pick up the specified set, hold the three dodecas of the set pinched between thumb and index finger, thumb and middle finger, and thumb and ring finger, and then throw the set at one or more dodecas on the playing surface (except on your first throw).

Throws 2 through 5 must each strike at least one of the six dodecas on the playing surface, moving a dodeca at least half an inch, or causing one or more dodecas to change face; failure to do so is considered a scratch.

The standard throwing technique is to release the set of 3 dodecas in your hand about one inch from the dodeca(s) on the table at which you are aiming; the dodecas from your hand are customarily thrown at about a 45° angle.

The five throws, in order, are:

If your throw was a scratch, you score zero points for the throw.

Your score for any other throw is the sum of the scores for all three sets (steam, ash, lava), regardless of how many of those dodecas you threw or otherwise changed. Score each set according to the scoring chart above.

Certain situations will grant you a bonus for your next throw or two. The maximum bonus that can be applied to any throw is 4x, so no scoring box can ever have more than "xx" for bonus marks.

Example: Let's say you are scoring for your opponent's throws, and after the third throw in the third round his score is 152.

Now for the fourth throw, he throws the ash set (gray dodecas), and the result is YYB (yellow-yellow-blue) with the steam set, YRR with the ash set, and RRR with the lava set.

Note that your opponent has also thrown a Little Rumble: 2 colors (all reds and blues). Thus, for the first throw for the next round, you place an *, because the opening throw for that round will be doubled. Here you would announce "172 and Little Rumble''.

Any bonus earned in the final throw of the final round earns a bonus box, of which there are only three total for all players to "share" per game. This means that going earlier in the turn order gives you a distinct advantage.

Krakatoa for 3 or 4 Flayers

The player with the highest score still starts the round, and play goes clockwise from there.

With 4 players, it is best to play in partnerships.

In this case, Partner A throws for Rounds 1,3, and 5, and Partner B throws for Rounds 2, 4, and 6, and any bonus throws your team gets. Partners are permitted to advise each other on throwing strategy, and both may help calculate the score for a throw. 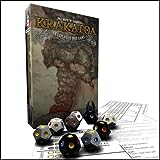