A high-pressure game of getting rid of a "hot" potato so as not to be holding it when time runs out.

This game probably goes way back. Sidney Addy's Glossary of Sheffield Words describes a game in which "a number of people sit in a row, or in chairs round a parlor. A lighted taper is handed to the first, who says:

Jack's alive, and likely to live If he dies in your hand, you've a forfeit to give.

The one in whose hand the light expires has to pay the forfeit".

Apparently later it was played with an actual hot potato. Whoever ended up with the potato when the music stopped was kicked out and the potato elimination match continued.

By the 1950s, manufactured Hot Potato games were already on store shelves. Remco's late 1950s version used small plastic pans for each player, covered up so that no one would know who was holding the real potato.

In the 1960s, there was "Spudsie", a wind-up potato who emitted a loud DING when time was up. 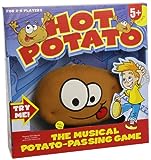 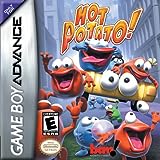