Decades ago it used to be a bustling city, the Capitol of Illusion, but now only the shadow of its former glory remains. The golden age ended the day Dahlgaard the Magnificent, the city's selfless benefactor and the greatest illusionist in history mysteriously vanished at the finale of his ultimate performance decades ago. No word was heard of him ever since.

One night, four talented illusionists, masters of different fields of magic, received a mysterious invitation. The great Dahlgaard himself, returning from the unknown, called for them to reveal the secret he had kept for a lifetime: the truth about the Trickerion Stone, his shining amber relic. Despite what many believed, it was much more than merely his lucky charm. He revealed that the stone bestows supernatural intellect, speed and perception to its owner - the qualities of the perfect illusionist.

Dahlgaard's secret was only a part of his grand design: after his death, he wants Magoria to flourish again as the City of Illusion, under the guidance of a worthy successor, who will inherit the Stone and his whole legacy. This successor is to be chosen from the four illusionists in a five-week contest for fame and fortune.

With so much at stake, the four magicians will stop at nothing to win. Who has what it takes to become the next Legend of Illusion?

Trickerion is a competitive Euro-style strategy game set in a fictional world inspired by the late 19th century urban life and culture, spiced with a pinch of supernatural.

Players take on the roles of rival stage illusionists, each with their own strengths and characteristics. They are striving for fortune and fame in a competition hosted by a legendary magician, looking for a successor worthy of the mighty Trickerion Stone, which is fabled to grant supernatural power to its owner.

Using worker placement and simultaneous action selection mechanisms, the Illusionists and their teams of helpers - the Engineer, the Assistant, the Manager, and a handful of Apprentices - obtain blueprints and components for increasingly complex magic tricks, expand the team and set up performances by visiting the Downtown, Dark Alley, Market Row and Theater locations on the main game board depicting a late 19th century cityscape.

The tricks are stored and prepared on the Magician's own Workshop game board, while the performances themselves take place at the Theater in the form of a tile placement mini-game with lots of player interaction. The performances yield Fame points and Coins to their owners based on the tricks they consist of. Fame points have multiple uses, but they also serve as a win condition - After turn 7, when the last Performance card is revealed, the game ends and the illusionist with the most Fame points wins.

The game offers 48 different Tricks to be learned from the Optical, Spiritual, Mechanical and Escape categories, over 90 character abilities, and 48 Special Assignment cards that influence the actions taken at the various game locations. The base game can be expanded with two optional rule modules to add further strategic depth to the game.

The "Dark Alley" expansion included in the base game adds a new location to the game. It also comes with 48 new Special Assignment cards, a new tier of Tricks, and 27 Prophecy tokens that can alter certain game rules turn by turn, giving the game additional variety. In Trickerion - Legends of Illusion, players take on the role of famous stage illusionists in the mystical city of Magoria. Their goal is to acquire the most Fame over the course of five weeks, thus winning a grand competition for the mighty Trickerion Stone.

Players will be able to learn more and more breathtaking Magic Tricks, acquire Components for them, and extend their team to be able to take more Actions each turn.

Tricks are stored and prepared in the Magicians' own Workshop. At the end of every turn, each Magician can perform their own spectacular magic show for Fame, fortune and shards of the mysterious Trickerion Stone. The player who is the most famous after five weeks wins the game. â€¦

Below is a quick outline of the game's components. This section can always be referenced later, but the rules here are only a summary - details can be found in the Game Phases chapter.

Game elements and concepts that are not part of the base game are always highlighted with this color.

Magic Tricks are the centerpiece of Trickerion. The core flow of the game consists of learning these Tricks, obtaining Components for them, preparing them, and finally combining them to compose breathtaking Performances in the Theater. â€¦

Players can use the Downtown to add new Tricks to their repertoire by visiting the great Dahlgaard in his Residence, expand their team by hiring Characters from the Inn, or obtain additional Coins when needed from the Bank.

The following Actions can be taken at the Downtown:

This expansion adds the following new elements to the game:

The following changes apply to the base game rules:

Flip the Main Game Board and all Player Game Boards to their "Dark Alley" side (marked with a black cat symbol). Separate all Trick cards into four decks by category and put them face up above the respective slots in the Dahlgaard Residence part of the Downtown. Each deck should consist of 12 Trick cards instead of the base game's 8. â€¦

This expansion introduces a new element to the game: Magician Powers. These offer a powerful new way to customize your Magician and add further strategic depth to your game.The Magician Powers variant can only be played together with the Dark Alley variant.

The following changes apply to the basic game rules when playing with Magician Powers:

Shuffle each of the three Power decks (yellow, orange and red), then place them face down next to the Main Game Board where players can conveniently reach them. Similarly to Trick cards, Magician Powers of different colors also have Fame Thresholds of 1, 16 or 36 (printed in a star on each side of the card). â€¦ Once per turn, one of your Apprentices receives an additional Action Point when placed at any Location except for the Theater.

For 1 Dark Alley Action Point, you may discard the Active Prophecy, then replace it with a Pending Prophecy and draw a new one in its place. 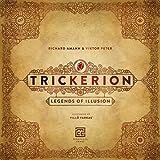 Trickerion: Legends of Illusion Board Game

Trickerion: Legends of Illusion Board Game by Ape Games

Get Ready for Game Night! Trickerion

Punched and Played: How to Play Trickerion