Through the Desert Fan Site

Tuareg: this is the name given to the nomadic people who journey across the sweeping sand dunes of Northern Africa. Easily recognizable by their traditional indigo garment, the Tuareg are a resilient, resourceful people.

For centuries, Tuareg merchants established and maintained trade through the Sahara Desert to facilitate commerce between cities in West and North Africa.

These caravans of the Tuareg transported numerous goods across the sands. Spices, wheat, gold, salt, and much more were all carried by camels and other beasts of burden through the various trade routes established over the years.

As the caravans could seldom carry enough water to meet their needs in the inhospitable territory, oases, water holes, and any other source of water and food became critical to their survival.

You lead a Tuareg tribe through the desert, vying for the best trade routes in this region of the wilderness. Expand your caravans wisely by making use of the scattered waterholes and gaining access to as many oases as you can. Among the shifting sands of the Sahara, the fate of your people rests in your hands.

Each player attempts to score the most points by snaking caravan routes through the desert, trying to reach oases and blocking off sections of the desert. Many people feel that it is reminiscent of Go.

From the award-winning game designer Reiner Knizia comes a game of strategy, patience, and cool plastic camels! The desert is still treacherous, mysterious, and without mercy. But for those willing to risk the dangers of the shifting, sun-baked sands, the desert holds riches beyond compare.

In Through the Desert, two to five players each control a tribe of nomads vying for control of the desert. By establishing caravans and taking over oases, the players gain points as their tribes increase in power.

Strategy is essential in deciding how and where to build your tribe's caravans. There are multiple ways to gain points and several ways to win. Should you try to build the longest caravan? Or should you dominate the desert's oases? Don't forget to keep an eye on your opponents' caravans, or you may find your own tribe cut off from valuable water holes.

Through the Desert is part of the so called Knizia tile-laying trilogy.

Through the Desert Game Rules In Through the Desert, each player controls a number of caravans consisting of pastel-colored camels. Players take turns placing more of these camels on the board, expanding their caravans in order to score points.

The game ends immediately after the last camel of any one color is played from the supply, after which players compare their point totals to determine the winner.

Before your first game, you will need to assemble the riders and their camels. Take the six riders of a single color and attach each one to a different-colored camel (green, pink, yellow, purple, turquoise, and gray). …

Through the Desert Variant Rules

If you wish to customize your games of Through the Desert, you can use any of these variant rules.

The reverse side of the board shows the Niger river running through the southern Sahara and offers players a new tactical challenge.

Aside from the different arrangement of land features, there are some special rules for the river board: 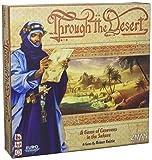 Game Fondue Reviews: Through the Desert