Sylvion is a solo/cooperative game for one or two players in which you must first prevent the Ravage cards from inflicting too much damage, for if the forest's vitality falls below 0, you immediately lose the game.

Then, once all Ravage cards have been played (at the end of the Final Assault), you must ensure that the vitality of the forest must be at its maximum.

To succeed, you will need to efficiently use your Sylvan cards, unravel the Ravage's scheme and counter its fiery rampage.

The Sylvan cards: the living aspects of the forest, united to stand against the Ravage's army. Play them wisely to win the game!

Before starting the introductory game, return to the box any Sylvan card featuring one of these two icons in its lower right corner:

(for the advanced game) and

(for expansion 1). These cards will be explained later.

Shuffle the remaining 24 Sylvan cards to assemble your Defender deck.

The Ravage cards: the army and logistics deployed by the Ravage to raze the forest.

Before starting the introductory game, return to the box any Ravage card featuring one of these two icons in its lower right corner:

(for the advanced game) and

(for expansion 2). These cards will be explained later.

The Battle phase is divided into turns, each of which follows these 4 steps:

Reveal the first Ravage card from each Ravage stack (leave it on its stack).

There are two types of Ravage cards: Elemental cards and Support cards.

These cards represent the Blazing entities the Ravage has sent to raze the forest. Each turn, these cards continue their relentless march towards the forest (the fifth space of a row on the battlefield).

When an Elemental card reaches the forest, it inflicts an amount of damage equal to its strength.

These cards represent the schemes and spells used by the Ravage to strengthen its Elemental army and weaken the forest defenders. These cards are resolved at the beginning of the turn and then discarded.

The letter in the top right corner helps determine the order in which these cards must be resolved when revealed during the same turn. The introductory game shows the Blazing and Simoon cards.

Discard the Blaze card after resolving its effects.

Each Elemental card on the battlefield (including those revealed this turn) immediately moves one space to the left.

Discard the Simoon card after resolving its effect.

If there are no Elemental/Blazing Elemental cards in play when a Simoon card is revealed, simply ignore its effects and discard it.

Move each Elemental (those revealed this turn as well as those already on the battlefield) one space to the left, towards the forest.

When an Elemental reaches the fifth space of its row (the forest), it inflicts an amount of damage equal to its strength: for each damage suffered, flip an Edge card to its Desolated side.

The Elemental is then discarded. If you must flip an Edge card but are unable to do so (they are all on their Desolated side), you immediately lose the game.

If an Elemental card reaches a space occupied by a Tree or Fountain card, combat occurs.

Draw the first three cards of your Defender deck. If need be, shuffle your discard pile into a new Defender deck, as was done at the beginning of the game.

There are three types of cards you can have in your hand: Animal, Tree, and Fountain cards.

These cards represent the timely intervention of one or more animals. They are immediately discarded, and their effects are applied as soon as they are played.

These cards represent the fantastical flora that grows in the forest of the Oniverse, and allow the forest to renew itself at the end of the game. A Tree card must be placed on an empty space of the battlefield.

At the end of the game, after the Final Assault (presented on page 12), count the vitality points at the bottom of each Tree card present on the battlefield. For each such vitality point, flip an Edge card to its Bloom side.

Reminder: to win the game, all Edge cards must be Bloom side up.

These cards represent the aquatic ramparts the forest raises to neutralize the fearsome fire Elementals. A Fountain card must be played on an empty space of the battlefield. Place them wisely so as to protect the forest and your Tree cards.

As previously mentioned, when an Elemental reaches a space occupied by a Tree or Fountain card, combat occurs.

Combat is resolved in this manner: compare both cards' strength. The weaker card (lowest strength) is destroyed (i.e. discarded; there will be a Sylvan card discard pile and a Ravage card discard pile).

If the weaker card is a Fountain or Tree card, the Elemental card takes its place (the Elemental is relentless).

If the Elemental card is the weaker card, the other card (Fountain or Tree) stays in place. In case of a tie, both cards are destroyed.

Note that when a Fountain card is destroyed, you get to draw one card.

You may play as many cards from your hand as you wish, as long as you pay their cost.

The cost of a card is shown on its top left corner. This cost is paid by discarding a number of cards equal to the cost of the card you wish to play.

Some cards show a cost of 0; you do not need to discard any other card to play these cards.

At the end of this step, you may not have more than 10 cards (your hand limit) in your hand: discard the excess cards.

When the last card of each Ravage stack has been revealed, the final turn begins. Play through the four steps (Reveal Ravage cards, Move Elementals, Reinforcements, and Defense), followed by one last additional step: the Final Assault.

If there are any Elemental cards left on the battlefield, each of these will move to the left until it is destroyed, or until it reaches the fifth space of its row (the forest), in which case it inflicts damage as normal.

If you survive the Final Assault, count how many vitality points you have on the battlefield's surviving Tree cards (shown at the bottom of the Tree cards).

If this total is higher than or equal to the number of Edge cards that are Desolated side up, you win the game (i.e. each vitality point allows you to flip a Desolated side up card to its Bloom side)! Otherwise, the forest has been reduced to ash and you lose the game...

The rules for 2 players are the same as the solo rules, with the following exceptions:

Each player draws a starting hand of 6 cards.

Each turn, one player is the active player, and she may play as many cards from her hand as she wishes. Her partner must pay the cost for those cards by discarding card(s) from his hand. He may not refuse to pay.

The role each player has will alternate this way:

Turn 1: Player A is the active player.

Reveal Ravage cards / Elementals movement / Reinforcements (Player A draws 2 cards) / Defense (Player A plays cards from her hand, those cards are paid for by player B)

Reveal Ravage cards / Elementals movement / Reinforcements (Player B draws 2 cards) / Defense (Player B plays cards from his hand, those cards are paid for by player A) Turn 3: Player A becomes the active player once again.

Players choose before starting how much cooperation they wish to play with: Pure Logistics (they can show each other their hands and discuss which strategy they wish to adopt) or Total Silence (players may not communicate any information regarding the cards in their hand and must guess their partner's objectives by observing their actions). 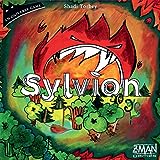