The Cult relies on word of mouth and beak to spread its gospel, and new enclaves can spring up anywhere on the map. Where the Cult rules clearings, they can build gardens, which will further radicalize the animals that live there.

While other factions spend cards to achieve their aims, the Cult acts chiefly by revealing cards and gradually drafting the ideal set of followers. Unless used for scoring, these cards are not spent and are returned to the Cult's hand during Evening.

However, this gentler approach makes movement and battle difficult, so these actions can only be undertaken by the most radicalized members of the Cult-their acolytes.

The gardens of the Lizard Cult attract Pilgrims, so the Cult rules any clearings where they have gardens, even one. This special ability trumps even the Eyrie's Lords of the Forest.

When the Cult is in play, spent and discarded cards are placed in the Cult's Lost Souls pile rather than the discard pile. At the start of the Cult's turn, the most common suit of Lost Souls sets the Outcast, the suit of clearings where the Cult can perform conspiracies with their acolytes for that turn.

Acolytes can be gained by Revenge: whenever you remove a warrior defending in battle, you place it in your Acolytes box.

Then, move all of the cards in the Lost Souls pile to the discard pile.

Finally, you can spend acolytes - warriors in your Acolytes box - to perform conspiracies. If the Outcast is Hated, all conspiracies cost one less acolyte.

At the start of Birdsong, the Cult has four acolytes. Rabbits are the Outcast.

Second, they spend two acolytes to crusade with the warrior in the rabbit clearing, They choose to move the warrior to an adjacent clearing and battle against the Marquise.

Reveal any number of cards from your hand, and perform one ritual per card, as follows. You cannot use revealed cards for any other purpose during Daylight.

Hatred of Birds: Bird cards are not wild when performing rituals!

Return any revealed cards to your hand. Then, you may craft cards by activating gardens that match the Outcast suit.

Finally, draw one card plus one per uncovered draw bonus. If you have more than five cards in your hand, discard down to five.

When news arrived that the Woodland on the shore of the great lake was descending into all-out war, the Riverfolk Company quickly dispatched its officers to set up shop.

As the other factions purchase services, the Riverfolk will be able to further entrench their commercial interests by building trade posts across the forest. The construction of these posts is a viable way to score victory points, but so too are dividends they might gain from their wealth.

The Riverfolk are excellent Swimmers, so they treat rivers as paths, and they can move between clearings connected by a river regardless of who rules the origin or destination.

The Riverfolk Company is a commercial faction that offers services to the other players. They set the costs of their services during their Evening.

For Sale: The Riverfolk's hand is always shown face up above their faction board.

Any other player, at the start of their Birdsong, may buy one Riverfolk service plus another per clearing with a trade post and any of their pieces. The buyer pays for services by taking warriors from their own supply and placing them in the Riverfolk's Payments box.

At the start of the Eyrie's Birdsong, Payments the Eyrie can purchase up to two services because they have pieces in one clearing with a trade post.

Mercenaries currently cost 3. The Eyrie decide to buy them, so they move three warriors from their supply to the Riverfolk's Payments box. With these mercenaries the Eyrie rule the rabbit clearing, so they can build a roost there, assuming the right card is in the Decree.

If your Payments box is empty, place two warriors in it. Then, if you have any trade posts on the map, score one victory point per two funds (warriors in the Funds box). Finally, move all warriors on your faction board to the Funds box.

You can take action by spending and committing funds-warriors in your Funds box. When you spend a fund, return the warrior to its owner's supply. When you commit a fund, move the warrior to the Commitments box.

The Riverfolk want to establish a trade post in this fox clearing, rte Marquise rules, so the Riverfolk must spend two Marquise fund.

Tte Riverfolk place a fox trade post with a warrior there, and score two victory points,

If you have more than five cards in your hand, discard down to five. Then, you may set the costs for your three services by moving the service markers on your Services tracks.

The Mechanical Marquise is an automated player that can be used in two ways.

The Mechanical Marquise uses the pieces of the Marquise de Cat, so you cannot include both in the same game.

Poor Manual Dexterity: The Mechanical Marquise does not have a hand of cards. It cannot be forced to discard cards. If you would take a card from its hand, draw a card from the deck instead.

If you would give it a card, discard the card, and the Mechanical Marquise scores one victory point.

When including the Mechanical Marquise, modify the following steps of setup.

Give the Mechanical Marquise a random seating position, as if it were a human player.

One player sitting near the Mechanical Marquise will be responsible for setting it up and playing its turns. The rest of these rules are written from the perspective of this player.

Before shuffling the deck, remove the four dominance cards and add the four spy cards. Draw five cards, not three, for the Mechanical Marquise.

Place these five cards in a row on a card stand so the players can only see the card backs. This is the Mechanical Marquise's Schedule of Orders.

from the item supply and place them in the Items for Sale box on the Mechanical Marquise's faction board.

7th Set Up Factions. Follow the Marquise's rules for faction setup, but ignore steps 4 (6.3.4) and 5 (6.3.5). The Mechanical Marquise does not use the Marquise's buildings.

Score two victory points per clearing you rule where you have at least three warriors.

Reveal the leftmost card on the Schedule of Orders, take the following actions, then dis- card the card. Move and battle happen in all clearings matching the suit of the order card.

Recruit happens in clearings based on the order's crafting cost, as described in step 3.

Draw cards and add them to the right side of the Schedule of Orders until it has five cards.

Spy cards use the same rules as dominance cards for playing, discarding, and taking available cards, but do not change your victory condition.

If you have a spy card in your play area, you may reveal one order card during your Daylight.

If you reveal an order card whose suit matches your spy card, you must discard your spy card immediately - for this purpose, bird cards are not wild.

Then, if your spy card was not discarded, you may swap any two order cards.

Solo Play: If you're playing alone against the Mechanical Marquise, remove the Favor of the Foxes, Favor of the Rabbits, and Favor of the Mice from the deck before starting play.

Cooperative games can be strung together into a campaign.

Each time the players win a game, the Mechanical Marquise will start the next game with three more victory points, but each player will start with one crafted card from their final play area of the last game. 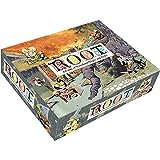 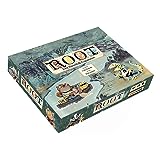