In the wonderful land of Arkadia, a very old king has no heir. He organizes a tournament to offer his throne to the bravest adventurer of the kingdom. Up to five finalists will wander seven worlds full of surprises...

In the drawing game Loony Quest, players study challenging level cards, then try to replicate the outline to meet targets and avoid obstacles on their tracing sheets.

Once finished, players place their sheets on top of the level card to see whether the drawings line up with the targets they meant to hit - or avoid.

Loony Quest features the same basic gameplay as in Doodle Quest, but has been developed differently by the publisher. In the weird and wonderful world of Arkadia, old king Fedoor has no heir. A grand tournament is being organized, with the throne going to the kingdom's finest adventurer.

Competing champions will travel through seven amazing worlds inhabited by the Loonies: crazy creatures that like nothing better than a good fight... To win the crown, however, champions will also have to avoid their rivals' sneaky tricks! This is an extension for the Loony Quest game. These rules cover the new game mechanics used in the extension. All rules used in the basic game still apply.

The Arkadia championship had barely drawn to a close when the contestants were captured by Vadoor - king Fedoor's exiled evil brother, who will stop at nothing in his quest for the throne.

Aided by the fearsome Rhinoboss, Vadoor has stowed the adventurers in the hold of a pirate ship headed for the open ocean. … 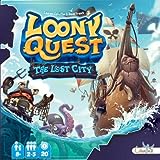