In the two-player version of JUNTA, in addition to the two actual players, three straw men play as well. The rules are the same as the normal JUNTA rules, with the following changes.

At the beginning of the game, each player receives four Politics cards face-down. Both real players may look at the cards belonging to the straw men and place their Influence cards face up.

The real players may deal with each other as usual. They can only make deals with the straw men when they belong to the same faction, as decided in Phase 4: The Budget.

The real players can then secretly look again at a straw man's cards and trade one card of theirs for one of the straw man's. One may only deal with one straw man at a time, and only one straw man (at most) per round.

Straw men do not make deals with each other. Nevertheless, it is possible that a straw man's card may find its way to another straw man's hand by way of a real player's hand.

At the beginning of the game, the game's owner decides who is Presidente first. Later in the game, the player with the most votes in his faction determines who wins any given election.

Only real players may become Presidente.

If a straw man has two many cards after the drawing of Politics cards, the real player in his faction determines which cards he discards.

Real players may examine the concealed cards of the straw men of their faction and play their Influence cards.

The three remaining offices are assigned by El Presidente to the three straw men.

El Presidente proposes a budget. El Presidente can promise straw men money to buy their loyalty. El Presidente must roll a certain number or lower, determined by the promised sum and the total number of votes held by the straw man, as shown on the following table.

Five votes are added to those of the Ministro's Influence cards.

Example: El Presidente promises four million pesos in his budget to a straw-man Ministro for Internal Security, who is supported by an Influence card (The Church, 10 Votes). He adds his five additional votes for a total of 15 votes. If El Presidente rolls a 1 or 2, he has successfully bought the Ministro's loyalty.

All the straw men not bought off by El Presidente join the opposition's faction (an X in the above table means an automatic failure). The straw men remain loyal to their faction until the next Budget Phase begins.

Then the budget is voted on-all the players in El Presidente's faction automatically vote for the budget.

The real player chooses the Location of each of the straw men in his faction.

Only real players may go into Exile. El Presidente's Cousin does not take over any Offices.

The real player to whose faction the Ministro of Internal Security belongs may conduct assassinations through Secret Police as above. One may not attempt to assassinate members of one's own faction.

El Presidente's Cousin does not take over any Offices.

The real player of a faction that carries out a successful assassination receives the cash on hand of the victim.

First, the real players conclude their bank transactions. The money belonging to the straw men is then given to the real player running their faction.

It goes into his Swiss Bank Account if the relevant straw man is in the Bank and the Bank is open. Otherwise, the straw men's money is added to the cash of the player leading their faction.

Otherwise, straw men do nothing with their money. Except in the Budget phase, straw men cannot receive money.

Each real player draws for the straw men of his faction. Here too, only real players may go into Exile.


The rules for two players apply, with the following changes: 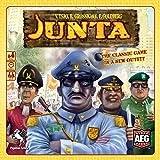