In a galaxy far, far away, thara was a disturbance in the force. It is up to you to help a friend, or defeat the dark side.

Use the force to find out who is causing the disturbance. Keep the questions coming to uncover the mystery identity of your friend or enemy.

Set Up your Gameboard

Return the card you didn't choose facedown to the deck. Your opponent does the same.

Then place all unused Mystery cards out of play. Sit facing your opponent, so that he or she can't see the Mystery character on your card!

The youngest player goes first. On your turn, you may either ask a question or guess who your opponent's character is.

But don't use your turn to guess the mystery character until you're ready! If your guess is wrong, you lose the game!


The Star Wars Characters On Your Gameboard

Notice the differences among the 24 characters on your gameboard.

There are different kinds of Star Wars characters: some are Jedi, some have turned to the dark side, some are human, some are from alien planets, and others are droids.

When you're ready to guess who the mystery character is, make your guess on your turn instead of asking a question.

Players alternate turns asking questions, until one player makes a guess. If you guess correctly - or your opponent guesses incorrectly - you win the game!

For an extra challenge, both players draw two Mystery cards, and place them side-by- side in their Mystery card slots. Your object is to guess who both of your opponent's Mystery Characters are!

You must say "both" or "either" when asking questions about the Mystery Characters.

To guess the mystery characters correctly, you must guess both of them on the same turn.

If you wish to play a series of games, slide the score keeper up one point for every game you win. The first player to win five games is the Champion! 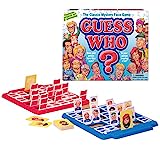 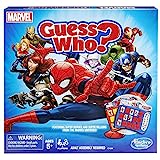 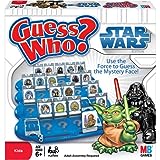