Each player has to fit as many of his/her 22 pieces on the board as possible.

Each player chooses a color and places that set of 22 pieces in front of his/her side of the board. The order of play is as follows: blue, yellow, red, green.

The first piece played by each player must cover one of the starting points indicated by the triangle symbol (see figure 2).

Each new piece must touch at least one other piece of the same color but without contact between two sides (see figure 3).

There are no restrictions on how many pieces of different colors may be in contact with each other. Three colors may touch at the same intersection (see figure 4).

Once a piece has been placed on the board, it cannot be moved during subsequent turns.

The game ends for a player when he/she is blocked and can no longer put down any pieces or that player has run out of pieces.

However, a player MUST play if it is possible to play. The game ends when all players are blocked from laying down any more of their pieces. This includes any players who may have placed all of their pieces on the board. Scores are tallied, and the player with the highest score is the winner.

Figure 5 shows an example of a completed game where the blue player has won. 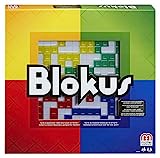 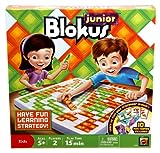