At first glance the South African game 30 Seconds looks a bit like Trivial Pursuit. Players play in teams of two.

Every turn, a player takes a card with five famous names on them, and tries to describe those names to his partner, who tries to guess what is being described.

The goal is to guess as many words as possible in, you guessed it, 30 seconds. 30 SECONDS is a description game played by two or more teams. The more players per team the better.

For example: if six people want to play, two teams of three players are better than three teams of two. As few as three people can play 30 Seconds.

To be the first team to reach the FINISH square. Teams advance by correctly identifying the names that their team-mates are describing. â€¦ 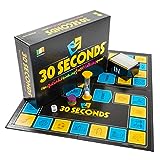