1960: The Making of the President Fan Site

All elections are turning points, but the presidential election of 1960 holds a special place in American history.

The 1950s had been a period of unparalleled economic growth and US global power under the stewardship of President Dwight Eisenhower and his Vice President, Richard Nixon. Nixon's humble origins gave him a common touch that appealed to small-town America and encompassed the idyllic spirit of the 1950s.

Senator John F. Kennedy was in many ways Nixon's antithesis; charming, Harvard-educated, and the scion of an American political dynasty.

Kennedy challenged Americans to confront the emerging uncertainties of the era, not with a vision based in the past, but embracing the future's new frontiers.

In 1960: The Making of the President, you take on the role of one of these formidable opponents as they vie to lead America.

As candidates, players must contend with all of the great issues of the day, from the Cold War and the voters' pocketbooks to civil rights and religious intolerance. The contest is fought out on an electoral map of the United States as it stood in 1960.

Using a card-driven game system, all of the major events which shaped the actual campaign are represented: Nixon's Lazy Shave, Eisenhower's belated endorsement, and Mayor Daley's Late Returns from Cook County are just a few of the many specific event cards players will encounter. The famous televised debates are also a pivotal element of gameplay.

As with a real election campaign, the challenge is to adapt your game plan as the ground shifts beneath your feet. There are never enough resources or time to do everything that needs doing. You will need to make tough calls about where to expend your effort and momentum. Your sole objective is to propel yourself into the White House.

This fast-playing strategy game for two players challenges you to relive the most significant political contest of the Twentieth Century.

Will you recreate history, or rewrite it? "1960: The Making of the President" provides you the opportunity to do both.

1960: The Making of the President Game Rules The goal in 1960: The Making of the President is to claim a majority of electoral votes on Election Day. To do so, you must win states worth a larger combined electoral value than your opponent. Electoral votes are won by gaining State Support in individual states.

This support is represented by cubes placed as state support into states. As only one player may have sup- port cubes in a particular state at a time, Support will shift back and forth as the players battle over valuable states. Whichever player manages to have support cubes in a state at the end of the game claims that state's electoral votes. …

1960: The Making of the President Sample Turn The first two cubes drawn for the Initiative Check are split, one blue and one red, so a third cube is drawn to determine the winner. The result is a second blue cube, giving Kennedy the initiative. He chooses to have Nixon play first this turn.

Nixon plays Heartland Of America for 3 CP, which he spends on a Positioning action to give himself two points of issue support in Defense. In addition, he receives one rest cube for this card, which he places in his designated rest cube zone. … 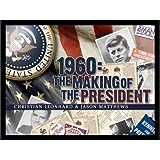 Double Trouble - 1960: The Making of the President

The Discriminating Gamer: 1960: The Making of the President