Tammany Hall was the political machine that dominated New York City politics by organizing the immigrant populations. While the organization's influence spanned from its founding in the 1790's to its collapse in the 1960's this game is set roughly between 1850 and 1870 the era of Boss Tweed.

The game board is based on a map of Lower Manhattan in New York. The actual physical location of Tammany Hall moved several times through its history and one more time for the sake of our game.

The Twelfth and Sixteenth Wards are farther north and not on this map. The English, Irish, and Germans were well established in this part of New York, but by the late 19th century the Italians had made substantial inroads. In Tammany Hall, the Italians and other immigrants may or may not arrive in the same numbers as historically.

You are an aspiring politician in Tammany Hall's heyday fighting for influence and votes in the wards of New York to become mayor. Manage ward bosses, slander your opponents, and curry political favor among the immigrants arriving from Europe. Tammany Hall is a game for 3-5 players and should take about 90 minutes to play.

Tammany Hall is a game of backstabbing, corruption, temporary alliances, and taking power at all costs. If you want to rule New York, you are going to need to play the city's growing immigrant populations against one another.

Help the immigrant groups who owe you political favors, call in those favors to slander your rivals, and win elections.

In Tammany Hall, players help immigrants settle in New York, collect political favors from those immigrant groups, send ward bosses into Manhattan to secure votes, and slander political opponents. An election is held at the end of every fourth year, and the player who uses his power base best will be elected mayor.

The Mayor's grip on the city is tenuous at best. After every election, the Mayor must pay off his political rivals by placing them in offices that they can wield to try to take control of the city. Every player is your friend, every player is your enemy.

Tammany Hall was the political machine that dominated New York City politics by organizing the immigrant populations. While the organization's influence spanned from its founding in the 1790s to its collapse in the 1960s, this game is set in lower Manhattan roughly between 1850 and 1870 - the era of Boss Tweed. Tammany Hall is played over a period of sixteen years, divided into four terms. During each year players will be able use the power associated with their office.

They can also either place two ward bosses or one ward boss and one immigrant cube on the board. If they place an immigrant cube they also take a political favor chip of the same color.

Players also have the chance to slander each other. An election is then held at the end of every fourth year. An election is held in each ward, the winner being the player who has the highest total of ward bosses and favor chips. Players expend favor chips in a sealed bid, so you are never quite sure what the opposition are going to do. â€¦ 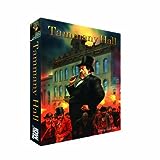