1812: The Invasion of Canada Game Rules The year is 18 12. War is raging across Europe and Russia as Napoleon, emperor of France, seeks to dominate Europe through conquest. However, a coalition of France's enemies, led by Great Britain, desperately resists his ambitions.

Great Britain, in dire need of resources, is capturing American ships that are supplying France, confiscating their cargoes and impressing some of their sailors to serve in its Royal Navy.

The young United States objects. Eager to defend its sovereign rights and to strengthen its position in North America, the United States declares war on Britain on June 18, 1812.

Taking advantage of the British army's struggles against Napoleon in Europe, American forces invade Canada on July 12, 1812. The goal is to drive the British from their last remaining colony on North American soil. Surprised, Britain reels from the attack and now has to face another enemy threat on another continent.

In 1812 - The Invasion of Canada, players take on the roles of the major factions that participated in the War of 1812. On the British side these are represented by the British Regulars (Redcoats), Canadian Militia and Native Americans.

The American Regular Army and American Militia comprise the American side. Players for each side will strategize together in order to plan and conduct their campaigns. Each side will attempt to capture Objective cities and forts on the map.

When a truce is called, the side that controls the most enemy Objectives wins.

The game is played over a variable number of rounds. During each round, all five factions will take a turn to mobilize units using movement cards.

The turn order is determined randomly. At the beginning of each round, all five Turn Order Markers are placed into the Draw Bag. A Turn Order Marker is blindly drawn from the bag and is placed on the '1st Turn' space of the turn track.

The color drawn denotes which faction's turn it is. The faction completes its turn before the next Turn Order Marker is drawn from the bag.

Note: The American Regulars always take the first turn of Round I in the Full 1812 Campaign.

The person that controls the faction whose turn it is.

The new round begins by drawing a new Turn Order Marker from the Draw Bag.

A drawn Turn Order Marker designates which faction takes its turn next. The active player can then perform the following actions in order:

Each faction has one or two Muster Areas on the map that show Enlistment cube graphics of their color.

Ex: Shown is the Albany area which is a Muster Area for American Militia and American Regular units.

At the beginning of each of their turns, the active player pulls Enlistment Units from their Unit Force Pool and places them in their Muster Area(s). The number of Enlistment Units placed correspond to the number pictured below the cube graphic of their color.

Ex: It is the Canadian Militia's turn. The active player pulls yellow Enlistment units from the Unit Force Pool and places one in Montreal and another in York.

There are 7 yellow units in the Fled Units Space which the active player places in any quantity in Montreal and/or York. If enemy units occupy a Muster Area, no units may be placed on that area.

This could result in a turn without Enlistments or Fled Units being placed on the map. If this is the case, the active player loses that turn's Enlistments and their Fled Units stay on the Fled Units Space.


2. Play a Movement Card and Up to Two Special Cards

Units may be moved by land or water, depending on what the Movement Card allows. No more than one Movement Card may be played by the active player during his turn.

Remove from the game all played cards, except for Truce Movement Cards.

Land Movement Cards allow units to move from one land area to the next. Units are moved by the active player as permitted by the Movement Card played and as modified by any Special Card played.

Armies are groups of units in the same area. An army can be made up of units from different allied factions.

The number of soldier figures on a movement card represents the number of armies that may be moved, follo many areas each of these armies may move.

Any army, including any of its units, may not be moved twice in a turn.

Ex: For the movement card shown, the American Regulars player may move up to four different armies two areas each. None of these armies or any of their units may be moved twice. (Some Special Cards grant an army added movement range).

Armies are moved from area to area, across area boundaries. An army must stop if it enters an area occupied by enemy units. Armies cannot drop off or pick up units in the midst of movement.

An army may divide into multiple armies before moving. This allows the player to move an army while leaving another army behind. If the Movement Card allows multiple army movements, then the player may also move the other army to a different area. Multiple armies may move to the same area creating one large army.

The active player does not need to move the full amount of armies indicated on the movement card, nor use all the allowed movement per army.

A minor river is shown as a black line and can be crossed without a boat in the same manner as any map area border.

Each faction has one Truce Card. Truce Cards are a type of Movement Card and are played as such. After having been played, they are lined up along the western edge of the map instead of being discarded.

To cross a large body of water, a Warship, Fishing Boat or Canoe Movement card must be played.

Lakes and large rivers that are shown on the map as an aqua marine color are considered Large Bodies of Water. A large body of water ends where rivers are "greyed out".

Ex: A British army in Prescott could move across Lake Ontario to Fort Niagara. This army could not move to Buffalo, which borders Lake Erie, because the two lakes are separated by a greyed out river.

Some water movement cards limit the size of the armies that can be moved. The number of cubes and their colors denote the maximum units that may be moved per army.

Fishing Boats allow two armies, of up to 3 units each and from two different areas, to move to one single area on the same body of water.

Ex: The American Militia Fishing Boat card allows two armies to be moved. Each army may contain up to 3 units and be composed of white and blue units, one of which must be white.

Out of Bounds Areas

Movement into the beige boundary territory is forbidden. Islands appearing in large bodies of water are not considered areas.

After the Active Player has finished with all movement for the turn, battles are resolved.

These are important cities or forts and are depicted with a star next to the city or fort name.

When a side controls an enemy Objective, control is tracked by placing a Control Marker on the area with the controlling side's flag symbol face up.

A side controls an enemy Objective if its units occupy the area at the end of a turn. If a controlling side's units leave or are forced out of an enemy Objective Area, its Control Marker is removed and control reverts back to the homeland owners.

Ex: British forces occupy Buffalo at the end of the Canadian Militia's turn. A British Control Marker is placed in this area.

The side that controls the most enemy Objectives at game end wins (4.0). This is easily determined by counting the number of Control Markers for each side on the map.

The Fort Erie and Queenston area has two Objectives in it. If the Americans control this area, two American Control Markers are placed on it.

A battle occurs when opposing armies occupy the same area. If there are multiple battles, the Active Player chooses the order in which the battles are resolved. Any Special Cards played, that may influence a battle, must be assigned prior to battle resolution.

Each faction's controlling player will roll his Battle Dice and make decisions for his own units. The player rolls an amount of dice corresponding to the number of his units present in the battle. The maximum number of dice that may be rolled by the American Regulars and British Regulars players is two, while for the American Militia, Canadian Militia and Native American players the maximum is three.

A Hit result causes an opponent's unit to be removed from the map and placed in its Unit Force Pool.

The opponents decide among themselves which unit to remove, if there is more than one faction to choose from.

A Flee result causes a faction's own unit of the colored die rolled to flee the battle.

These units are placed in the Fled Units Space on the map. These Fled Units are returned to the owning faction's Muster Area(s) at the beginning of that faction's next turn.

When a blank die face is rolled, the controlling player may decide to move one of his own units out of the current battle. This unit can move to any adjacent Friendly Area.

The order in which Command Decisions are carried out is determined by the involved allied players.

If there are no friendly areas adjacent to a battle, then movement out of the battle is not an option.

An army that moved into a battle by water may not move out by water with a Command Decision.

Native American units have an advantage and may use a Command Decision to move into unoccupied enemy Homeland Areas, including unoccupied American Objective Areas.

At the end of his turn, the active player draws his hand back up to 3 cards. If there are not enough cards left in the draw deck, play with what remains.

If a player draws and only has 3 Special Cards in his hand and no Movement Cards, the player must show his cards, reshuffle them back into his draw deck and draw 3 new cards. A player must always have one movement card in his hand after drawing.

The Active Player's turn is over and a new turn begins by drawing a new Turn Order Marker from the Draw Bag.

The game ends if at the end of a round all Truce Cards of one or both sides have been played. There are 3 Truce Cards for the British allies or 2 for the American allies.

The game is won by the side with the most Control Markers on the map. Games can end in a tie.

Ex. The Americans control three British Objectives, so have 3 American Control Markers on the map.

The British control two American Objectives, so have 2 British Control Markers on the map. The Americans win by 1. 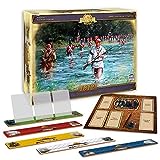 The Invasion of Canada Expanded Edition