The Countess is the last living relative of the oppressive Royal Family that used to rule the land. Using her vast fortune and army of soldiers she seeks to restore the nobility to their former glory days, with herself as Queen.

She will use everything in her arsenal to stop the local villagers from organizing on their own. What she lacks in goodwill from the people and economic skills she makes up for with bribery, dirty tricks and violence.

The Solo Mode is a way of playing Villagers with just one player. It uses two decks of events and some simple rules changes to simulate playing against an evil Countess.

Though you have the advantage of controlling what villagers will end up in each Village, you must react to disastrous Events every round, adapting your strategy around them.

Set up the game like a 2 player game, except:

The Solo Mode follows the same rules as a 2 player game, but as there is only one player playing there are some additional rules for each phase:

Whenever you draft a card from the Road, also place a face-up villager of your choice from the Road into the Countess Village (The Countess builds in the Draft Phase!). This is done before dealing new face-up cards to the Road from the Stacks.

The villagers placed into the Countess Village ignore the rules for Production Chains, every villager is placed separately.

The Countess ignores the Padlock mechanic when villagers are placed into her Village. You still have to pay her villagers to unlock any villagers you play with Padlocks, as per the normal rules for Padlocks. She counts as another player in that regard.

Resolve the End of Draft Phase as you would in a 2-player game, except The Countess does not place Gold on any villager on the Road. If The Countess for any reason gets a villager you placed Gold on during the end of a Draft Phase, she gets the coin(s) placed on it to her Supply.

The player drafts a villager, then places a face-up villager from the Road into the Countess Village. After this, two new cards will be dealt from the leftmost stack on the Road. As the player has 1 Food, this process must be done 3 times this round.

The Countess gets a Truffler at the end of the Event Phase. It's worth 8 Gold, so 2 new Event cards are dealt.


Switching from summer to winter events

The Jester belongs to the player and can be played at any time. As described on his card, he allows you to immediately discard an Event.

He cannot be used to discard an Event that has already been resolved or is in the middle of being resolved (when The Countess gets a face-down card from the Conscription event for example, you cannot discard the Event after looking at the card!).

He is discarded after use, so can only be used once. The Jester is not in the player's hand, and so cannot be traded in for a Basic Villager.

The Countess scores exactly like a player in the Market Phases (including Silver Symbols in the Second Market Phase). The Gold on the Countess Card is included in the scoring.

In the final round, when the Second Market Phase (and the end of the game) has been triggered, the Countess does not place the top card of the Reserve into her Village.

You win if you have more Gold than The Countess in your Supply at the end of the game.

For a more forgiving game (recommended if playing for the first time!), make the following changes:

For a more challenging game, make the following changes:

If you want to get a solo game going quickly, you can skip reading the rules on this page and just start playing, then look things up here while playing. 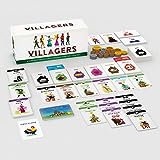