TUCANA, a group of little known islands filled with peculiar creatures and signs of ancient cultures. The players will be planning a network of trails across the islands to help villagers travel between villages, and let them visit as many sights as possible. May the best planner win!

In TRAILS OF TUCANA, each player is given a map showing villages, sights and various terrains. Every turn, two terrain cards are revealed. All players draw a trail between those two terrains somewhere on their own map.

You score points by connecting matching villages and by connecting sights to villages. The game ends when the deck of terrain cards has run out twice, and whoever has the most points wins the game.


After all players are done, the turn is over, Then, start the next turn by repeating step 1 and 2, In each turn, cover up the cards from previous turns, Continue like this until there is only one card left in the deck (see Round End),

Rare Case: If there are no remaining connections on your map for the current combination of terrains, you do not draw a trail.

Whenever a player connects a sight (obelisk, book, toucan, yeti or sea monster) to any of the ten villages, the player draws a circle around the left score value for this sight in the Sight Scoring Box.

Whenever a player connects the second sight of the same type to any village, he/she circles the right score value and immediately (in the same turn) draws one bonus trail segment anywhere on their sheet between any two adjacent spaces (of any terrain).

Adam connects an obelisk to a village and circles the 1.

In a later turn, Adam connects the other obelisk to a village.

He circles the other score value and immediately draws a bonus trail segment anywhere on his sheet.

He chooses to draw the segment between two adjacent mountain spaces.

Note: A player may connect a sight to ANY village, even if another sight (of same or different type) has already been connected to that village. If a trail segment triggers several sights to score at the same time, score the connected sights in any order.

Whenever a player connects two villages with the same letter ("a pair of villages"), he/she circles the score value of this letter in the Village Scoring Box. A player can only score each pair of villages once.

Write down the bonus points in an empty space in the Bonus Scoring Box. The bonus card is then discarded. If more than one player connects the same pair of villages during the same turn, all tied players get the bonus.

In a game with 5-8 players, there are 2 bonus cards of each letter. The first time someone connects a certain pair of villages, they score the value shown on the top card. This card is then discarded.

The next time someone connects the same pair of villages, they score the points shown on the bottom card. Then, this card is also discarded.


Note: When there are no more bonus cards of a certain letter, other players can no longer score bonus points for this pair of villages (but they still score normal points for connecting this pair).

The round ends when there is only one card left in the deck. The leftover card is not used. All players now add together all circled values for their sights and write this sum in the first space ("I") in the Final Scoring Box.

All terrain cards are then shuffled (including the leftover card), and the second round begins.

Note: Sights are scored twice, at the end of round 1 and 2, while points for connected villages and bonuses are only counted at the end of the game.

After the second round, all circled values for sights are added together again, and the new sum is written in space "II" in the Final Scoring Box.

Note: Sights that you manage to connect to a village during the fiirst round will be worth more, as they are scored twice.

Example: After round 1, Alice has connected sights with a total value of 10. She writes this number in the "I" score box. These sights will be scored again at the end of round 2.

The game ends after the second round (after the deck has run out a second time) and all sights have been scored again.

All players sum up their points and write down their scores in the Final Scoring Box:

In case of a tie, the tied player with most points from bonuses wins. If it's still a tie, the victory is shared. 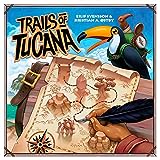