Load up, put the hammer down and get ready to haul some cubes across the Heartland for hard-earned cash! Manage your hand of Freight Bills and Fuel Cards to drive through the Midwest, picking up and dropping off soy beans, corn, cattle and pork for the highest profit.

Drive fast, haul smart, and stay ahead of the other truckers to be king of the road!

Place the Distribution Center in the middle of the playing area.

Shuffle the 12 Location cards and place with

side up randomly in configuration shown at right.

Before the start of the first turn, the third player chooses one removed Location card and places it adjacent to any Location. The second player then does the same.

Place 5 Cargo Cubes that correspond to the color of the Native Good on each of the Location cards. No Cargo Cubes should be placed on the Distribution Center.

Each player chooses a color and places their semi-truck on the Distribution Center. Players then take the corresponding Score/Cargo cards and place their scoring pawn on the number 5.

Shuffle the Freight Bills and Fuel Cards together and deal 5 cards to each player. Place the 3 topmost cards of the deck face up next to the draw pile.

A basic turn can be divided into three phases:

In this phase, players must choose one of the following:

A) Discard Fuel Card(s) and move exactly the number of spaces indicated on the card(s). (1 move = 1 Location or Distribution Center Card). Fuel Cards may be added together but players may never move more than 3 spaces per turn.

When adding Fuel Cards together, if the sum on the cards exceeds 3, you may only move three spaces and additional fuel is lost.

B) Pay 1 point (adjust Score/Cargo card accordingly) to move 1 space, up to 3 spaces per turn.

C) If a player runs out of points and does not have any Fuel Cards in hand, then his truck is placed on the Distribution Center and must take the Discard/Draw Action.

Note: Players must choose to either discard Fuel Cards OR pay points to move - they may not combine the two methods.

During this phase, players must choose one of the following 3 actions per turn: Load, Unload, or Discard/Draw.

Players Load their Freight Trailers by discarding any number of matching Freight Bills and placing them face up in the discard pile.

As the game goes on, Cargo Cubes may accumulate at a Location that are not a Native Good (see Unload). These may be picked up by discarding two matching Freight Bill cards for every one Cargo Cube to be Loaded.

Note: Players may only Load one type of good per turn.

Players Unload their Freight Trailers at Locations in order to earn cash (points) for Payment on Delivery.

Each Location has two small goods icons with numbers next to them. These represent goods in demand and the price paid for each Cargo Cube delivered there.


Players Unload Cargo Cubes by discarding from their hand any number of matching Freight Bills and placing them face up in the discard pile.

The discarded Freight Bills must match goods of the Cargo Cubes they have in their Freight Trailer and Cargo Cubes may only be Unloaded at Locations that have demand for the goods. Players collect the points indicated by the number on the goods icon for each Cargo Cube unloaded.

There may only be eight Cargo Cubes at a Location at any one time during the game.

Note: Players may only Unload one type of good per turn.

Instead of Loading or Unloading, players may discard as many cards as they choose from their hand to draw new cards (see Refuel). To use this action, players must pay one point and adjust their Score/Cargo cards accordingly.

The player now draws cards from the supply until he has five cards in hand. Players may choose to draw from:

Or any combination of the above two. Refueling signals the end of the player's turn.

When one player reaches 40 or more points on his turn (50 in a 2-Player game), the other players get one more turn and the game ends.

If any player has Cargo Cubes in their Freight Trailer that have not been unloaded they must pay a penalty (adjusting their Score/Cargo card accordingly) for each remaining Cube.

The penalty per cube is indicated on the Distribution Center. 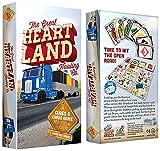