Splendor is a resource management game in which you take on the role of a rich merchant during the Renaissance. Your goal is to collect the most prestige points through chip-collecting and card development.

There are 3 levels of cards and shuffeled to have 3 decks. Then 4 cards are laid out from each deck to form a 3×4 tableau.

On your turn, you may collect gems, buy and build a card, or reserve a card. When you collect gem, you have two choices, you can either take 3 different kind of gems or two gems of the same kind.

Notice that you can have only 10 gems in your hands, if you have more, then you have to discard down to 10.

When you buy a development card, you will have pay its price with gems. These cards will give you a permanent gem bonus and sometimes even prestige points. You may buy any of the 12 face-up cards (or a resevered card).

Reserve development cards in order to prevent your opponents taking them. It cost you a turn, but you will also get a gold coin which you can use as any gem. You can reserve any of the 12 face-up cards but also the top card on the 3 decks.

If you're wealthy enough, a player will receive a visit from a noble which also grants you prestige points.

To win the game, you must reach 15 prestige points before your opponents do.

The game rules are very easy to learn and it's really a good family game. Hardcore gamers will miss real depth but if you just want to have some fun, that's not a big deal.

To win Splendor is both based on luck and strategy. You start the game trying to pick up as many first level cards.

One you have enough enough of such evelopment cards, you try to collect prestige points by attracting nobels and by buying level 3 development cards.

A lot depends on the tableau, sometimes it's better to go for the nobles, sometimes for the level 3 cards.

The starting player has also a small advantage. That's why the youngest player (or the less experienced player) should start the game.

Splendor can be played by 2-4 players and the average game takes about 30 minutes.

The board game was created by Marc André and first published in 2014 by Space Cowboy. Shuffle the noble tiles and reveal as many of them as there are players plus one (example: 5 tiles for a 4 player game). â€¦ The Cities of Splendor shine throughout the world while wealth from the Orient offers new opportunities to all. These four expansions must be played singly.

Place this tile in front of the first player to remember that the player sitting on their right will be the last to play at the end of the game.

Bruges, Lyon, Lisbon, Seville, Venice, Florence, Pisa: each city wants to make a unique major scale jeweler's work and, to this end, spends lavishly. But will you be able to fulfill these extravagant demands? â€¦ 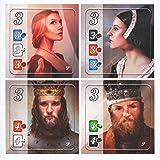 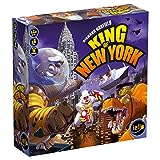 King of New York Board Game