String signs together (made with your hands) to a rhythm made by all the players without making a mistake. Any mistakes are punished with a « Ball » card. At the end of the game, the player with the most is the loser.

Take the « Sign» cards (with the title of the game on the back) and the « Ball » cards and shuffle them separately and then place each pile on the table.

Deal a « Sign » card to each player which he puts face up in front of himself.

Put the « Rhythm and ball in 8 examples» card in the center of the table. This is an example of the start of a game.

All the players chant the same rhythm: tap their knees twice and clap their hands once, exactly as in the Queen song We Will Rock You.

It is recommended repeating step 1 several times before launching into a series, so that everyone is in sync.

The player with the best sense of rhythm begins a series:

When a player gets it wrong (wrong rhythm, forgot his sign, etc). he:

A new turn can begin: all the players begin the rhythm again and the player who just lost begins a new series with his new sign.

As soon as the 10th and last « Ball » card has been given out, the game stops. The "Ball" cards are counted taking all the « Ball » cards into account, including the ones text side whose effect has not yet been used.

The loser(s) are the players who have the greatest number of « Ball » cards and the winner(s) are the ones with the least.

Don't hesitate to slow the rhythm down for a game with lots of beginners or speed it up if the mistake is taking too long to come.

A chain of the players' first names circulates at the same time.

Be careful, the player who is called by his first name can be :

In this way the 2 chains develop, cross over, join up, separate.until one of the players breaks one of them. So that you don't lose, follow the sign chain with your eyes and listen to the first name one. It's as simple as that, no? 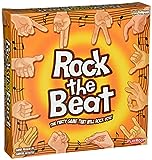