Be the first player to score 100 points by collecting the most cards from the center stacks.

Ratuki is not your traditional card game. each color deck has 35 cards containing different numbers and symbols for 1-5 and two wild Ratuki cards. see below for example of each. Any reference to a number in these instructions includes all symbols.

In Ratuki, everyone maintains their own 3 card piles: draw, discard and scoring, and at the same time everyone plays on multiple center stacks in the middle of the table.

The maximum number of center stacks in play equals the number of players.

Everyone plays on all center stacks. these are stacks of cards that you and other players create, play on and take to score points.

Pick a scorekeeper. Grab a pen and paper for scoring. Each player chooses a color deck. set aside unused decks. Shuffle your deck and place face down directly in front of you. Your deck is now your draw pile.

Each player draws three cards from their draw pile. When all players are ready, everyone shouts "Ratuki!" to begin play. Instead of taking turns, everyone plays at the same time.

Any player can play a "1" card of any type (number, roman numeral, die, etc).. It is not required that every player start a center stack to be able to play, and a player can start more than one center stack.


Playing on a center stack

Once any "1" card is played, a center stack is in play for everyone. All players play their cards simultaneously on any stack. You do not need to match symbols or colors. cards are played in ascending or descending (up or down), sequential order. see below for how each card can be played:

Play stops for everyone when a player has no cards remaining in their draw or discard piles and he/she shouts "out!", or it is determined that no one can play another card. All players begin scoring.

Each card is worth one point. Do not count cards that remain in the center stacks.

The scorekeeper records all player scores. If no player's total score equals or goes over 100, separate the decks by color, shuffle and play again! 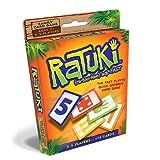