Get rid of the rats and go for the cats! In Rat-a-Tat Cat, less is always better, and you want to go out with the lowest score. Can you remember the numbers on other players' cards?

Can you keep a poker face, but notice when another player looks really pleased? Sharpen your memory and your timing, and have fun with the cool cats and bad rats of Rat-a-Tat Cat.

To have the lowest score at the end of the game.

Choose one player to be the dealer. The oldest player can be the scorekeeper. The scorekeeper will record each player's score at the end of each round of play.

Shuffle the deck. The player to the left of the dealer cuts the cards. The dealer then deals four cards, one at a time and face down, to each player. The remaining cards are placed face down, in the middle of the table, as the draw pile.

The top card of the draw pile is turned over to start the discard pile. If that card is a Power card, it is placed back in the deck and another card is turned over.

Without looking at his cards, each player places his four cards face down in a line on the table in front of him.

The player to the left of the dealer has the first turn, and play continues in a clockwise direction.

For each turn, a player may:

A player's choice is based on remembering the values of his four face down cards. Keep track of what you have so you won't accidentally replace your low point cards with high point cards.

During the game, when the draw pile is used up, shuffle the discard pile and turn it over for a new draw pile.

Power cards have special powers which help you in the game. Power cards only have their powers when you draw them from the draw pile. If a Power card is dealt to you at the beginning of the game, it cannot be used. Because

Power cards have no point value, if one of them is among your cards at the end of the game, you must replace it with a card drawn from the draw pile. (This can be risky, so you'll want to get rid of these cards early in the round). If a Power card is discarded, it may not be used again by any player.

There are three kinds of Power cards:

When you draw a Peek card, show it and then peek at any one of your cards.

Now you will know what you have, or you can refresh your memory if you have forgotten what you have. Your turn is over and you discard the Peek card.

When you draw a Swap card, show the Swap card and discard it. You may now switch any one of your cards with any card of another player (swapping is optional).

The tricky part is that you can't look at your card, or at the card you are getting. After the swap your turn is over.

When you draw a Draw 2 card, show the card and then you may take two more turns. First you draw the next card from the draw pile.

This second card may be used or discarded. Your turn is then over. If either of the cards drawn are another Draw 2 card, the Draw 2 sequence starts again.

When a player thinks he has the lowest score and can win the round, he may end the round by knocking on the table and saying "rat-a-tat cat" at the end of his turn.

Once he knocks, every other player has one more turn. Each player then turns over his cards. Players replace all Power cards by drawing from the draw pile. If another Power card is drawn, the player draws again.

All cards are collected and passed to the player to the left of the dealer who reshuffles and deals for the next round.

The player with the lowest total score at the end of the game is the winner.

A game may be played three ways:

Each player now knows two cards of each of the other players. Only the face down cards may be swapped with a Swap card. All other rules of play are the same. 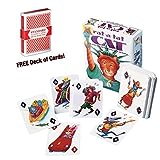