Raiders of the North Sea is set in the central years of the Viking Age. As Viking warriors, players seek to impress the Chieftain by raiding unsuspecting settlements.

Players will need to assemble a crew, collect provisions and journey north to plunder gold, iron and livestock. There is glory to be found in battle, even at the hands of the Valkyrie. So gather your warriors, it's raiding season!

How players use their Plunder is also vital to their success. The game ends when either 1 Fortress raid remains, all Valkyrie are removed, or all Offerings have been made.

Before getting started, players should familiarize themselves with the board, cards and their icons.

When playing for the first time or teaching others, there is one simple concept to understand:

After doing so, they will pick up a different Worker for a second action. Regardless of which actions they take, this will always be true.

Follow these steps to setup Raiders of the North Sea:

1. Place the game board in the centre of the playing area.

2. Shuffle all 71 Townsfolk Cards into 1 deck and place facedown within reach of all players. This forms the Townsfolk Draw Pile. Allow space for a Discard Pile also.

3. Shuffle all 16 Offering Tiles and stack them facedown to the side of the board. Turn over the top 3 Tiles, placing them faceup to the right of the Long House (the 3 spaces at the bottom right of the board).

4. Place all Valkyrie and Plunder (Gold, Iron and Livestock) into the Black Bag and give them a good mix. Randomly draw and place the required number for each raiding space. (Green icon at the top left of each raiding space). Remove all remaining Valkyrie and Plunder from the bag. These should be placed alongside the board to form the Main Supply.

Note: Raiding spaces are the transparent rectangular boxes over each Settlement (Harbours, Outposts, Monasteries and Fortresses).

5. Place all White and Grey Workers on their required raiding spaces (Worker icon at top right of each raiding space). These are collected during raids. Place 3 Black Workers in the Village. These should be on the Gate House, Town Hall and Treasury (buildings with a blue card icon).

6. Place all Silver and Provisions to the side of the board in the Main Supply. The dice can be placed here also.

7. Each player receives 2 Silver, 1 Black Worker, and 1 Ship Card in their chosen colour (with the 50 VP side facedown).

8. Place 1 Score Marker of each player's colour on the 3 '0' spaces around the board's edge. These track each players Armour

9. Along with the Black Bag, place any unrequired Black Workers, Player Cards and Score Markers, back into the box.

11. Each player rolls both dice to determine a starting player. The highest roller starts the game.

The Main Supply is limited to its current resources (Silver, Provisions and Plunder). Players can only claim what resources are available at the time.

Offering Tiles are shuffled and kept facedown. Should this stack ever run out, the game is over. Making Offerings to the Chieftain is a vital part of scoring Victory Points. To do so, players need to collect varying sets of Plunder and Silver, as shown on each Offering Tile.

Players are limited to holding no more than 8 Silver, 8 Provisions, and 8 cards in their hand at the end of their turn. However, they may collect more than this during their turn. There is no limit to how much Plunder players may hold.

Proceeding clockwise from the starting player, each player takes their turn in full. On their turn, players may choose to Work or Raid. Players continue to take turns until 1 of the 3 end-game conditions have been met (See page 10). Regardless of their choice, each turn will always follow the same pattern:

Having a good Crew and enough provisions are vital to successful raiding.

So before making any raids, players will need to do some work to prepare their Crew and collect supplies. This is all done in the Village, at the bottom of the board.

There are 8 different buildings, with various actions. At the start of the game, there are Workers in the Gate House, Town Hall and Treasury. These buildings are currently blocked for placing a Worker. On their turn, players place their Worker in an available building. It is important to note that there are 3 different Worker colors. In some cases, the Worker's color alters the building's action.

The starting player could place their Worker in either the Mill (to gain 1 Provision), Barracks (to hire 1 Crew Member), or Silversmith (to gain 3 Silver). The Armory and Long House require a Grey or White Worker. After placing their Worker, and resolving the building's action, they then pick up a Worker from a different building and resolve its action also. Players hold onto the Worker they picked up, as they will place it on their next turn.

For example, the starting player decides to place their Worker in the Mill to gain 1 Provision. This is taken from the Main Supply, and added to their own. They then decide to pick up the Worker from the Gate House. They draw 2 new cards from the Townsfolk Draw Pile and add them to their hand.

After picking up their new Worker and resolving any action, their turn is over. Play then continues with the next player, in a clockwise fashion. As before, the current player can either Work or Raid.

Once players have hired enough Crew and collected Provisions, they may choose to raid on their turn. To raid a Settlement (Harbour, Outpost, Monastery or Fortress), players need to meet 3 requirements. They must have:

Each Settlement has a different set of requirements.

For example, this Monastery requires a minimum of 3 hired Crew, 3 Provisions, 1 Gold and either a Grey or White Worker.

Once a player decides to raid a Settlement, they must follow these steps: Ignore step 3 when raiding Harbors (these always score 1 Victory Point).

After picking up their new Worker, along with their Plunder and resolving any Valkyrie actions, their turn is over. Play then continues with the next player, in a clockwise fashion. As before, the current player can either Work or Raid.

For example, a player decided to place their Grey Worker in the Monastery shown above. They first make sure they have at least 3 Crew Members. As they do, they pay the required 3 Provisions and 1 Gold to the Main Supply. They then roll 2 dice and add up their Military Strength to determine any Victory Points gained. After scoring, they take their Plunder and new Worker, adding them to their supply.

There are 3 different ways to score Victory Points during a raid:

Each Settlement (except Harbors), offer 2 or 3 levels of Victory Points.

These are all paired with a set level of Military Strength.

When raiding, players will roll 1 or 2 dice, as indicated by the Settlement (not applicable for Harbors).

After totalling their Military Strength, players determine how many Victory Points they gained, if any. These are scored immediately by moving the current player's Score Marker around the Victory Point Track.

Should players ' scores ever reach 50 Victory Points, they should turn over their Ship Card, revealing the 50 VP side. Players loop their Score Marker back around to the 0 mark and continue scoring as normal. Their total score now equals 50, plus their score on the Victory Point Track.

These are additional to any Victory Points gained for Military Strength (even if they scored none), and are added to the Victory Point Track in the same manner.

After scoring any Victory Points for Military Strength and Hired Crew, players pick up their new Worker and Plunder.

Players must take 1 of the remaining sets of Plunder from the raided Settlement.

Once all Plunder has been taken, players can no longer raid that particular Settlement (there will be no available Worker Spots anyway).

Plunder is worth Victory Points at the game's end.

However, it can also be spent throughout the game to help make further raids, or gain additional Victory Points. For now, players take the Plunder, adding it to their supply.

Some raids may also include 1 or more Valkyrie with the Plunder. Although taking Valkyrie result in the death of hired Crew Members, they also offer another way of scoring Victory Points. When taking Valkyrie, players should follow these steps:

There are 3 ways the game can end:

Once 1 of these 3 conditions have been met, the current player finishes their turn, resolving any unfinished actions. Each player (including the current player) has 1 final turn before the game ends (1 final round).

Once the game has ended, players score additional end-game Victory Points. These are recorded by moving players' Score Markers around the Victory Point Track. End-game scoring consists of:

After each player has added all their end-game scores to the Victory Point Track, the player with the highest final score is declared the winner! 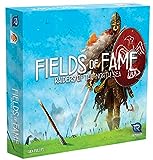 Raiders of the North Sea: Fields of Fame 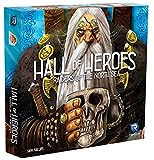 Raiders of the North Sea: Hall of Heroes