No moderator, no elimination, ten-minute games.

One Night Ultimate Werewolf is a fast game for 3-10 players in which everyone gets a role: One of the dastardly Werewolves, the tricky Troublemaker, the helpful Seer, or one of a dozen different characters, each with a special ability.

In the course of a single morning, your village will decide who is a werewolf...because all it takes is lynching one werewolf to win!

Because One Night Ultimate Werewolf is so fast, fun, and engaging, you'll want to play it again and again, and no two games are ever the same.

This game can be combined with One Night Ultimate Werewolf Daybreak. In One Night Ultimate Werewolf,'each' player takes on the role of a Villager, a Werewolf or a special character. It's your job to figure out who the Werewolves are and to kill at least one of them in' order to win...unless you've become a Werewolf yourself!

You may use additional roles in your games beyond the basic setup. Just take out a card and replace it with a different one. You may use virtually any combination of cards, though you probably don't want to introduce more than 1 or 2 new roles at a time, so players can easily learn them. â€¦

It's not uncommon for the first few games of One Night to start the day phase with people looking at each other, wondering what to say.

To get things started, you might want to offer a limited amount of information, such as "I'm the Seer but I'm not going to say what I looked at... yet", or "I started as the Robber, but I exchanged someone's card...once some other people start talking I'll tell you whose it is".

Knowing how all the roles in the game work is really important if you're a Werewolf, as you'll have to lie initially about who you are and what you did (if anything). â€¦ In One Night Ultimate Werewolf Daybreak, there's been an outbreak of werewolves in your town, and all of them have special powers. Fortunately, the village has all sorts of amazing roles to help them figure out who those werewolves are

Playing with the Daybreak Roles

This section describes all of the roles in Daybreak, and also explains how they interact with roles from the original One Night Ultimate Werewof game. â€¦ 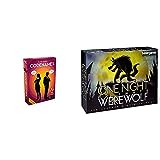 One Night Ultimate Werewolf - PART 1 - With MEGA 64, ProJared, and The Completionist! - Table Flip