Be the first player or team to reach and complete The Final Namesake square.

Place a color dot label on each of the six movers. Each player takes a mover and puts it at START. Each Namesake card has six letters on it. Decide together which letter you will play for this game.

For example, if the group decides to use "C", on every turn, when a new card is drawn, players will read the name beside the letter "C".

To see who will move first, all players participate in a nameoff round (see description under "The Squares"). The winner of the name off rolls the die, moves around the gameboard and follows the directions for the square they land on.

On each turn, you will draw a new card and read the one name next to the letter you have decided to play. Try to name a famous person (or people) with that first name, depending on what kind of square you land on.

When you land on one of the six types of category squares, you draw a name card. You or your team must then name just ONE famous person with that first name in that category in 30 seconds.

For example, if you draw "John", the following would be appropriate for the corresponding categories:


If you succeed, roll, move forward and follow the directions for the next square. If you do not succeed, control of the die moves to the left and, on your next turn, you must draw a new card and win this square before you can move.

Note: at the beginning of your turn you cannot roll if you are resting on a category square. You must draw a new card and win that square before you can roll ahead.

Everyone plays when someone lands on a nameoff square! This is a great chance for opponents to gain control of the die. The player who lands here takes the card and reads the name next to the chosen letter.

If, for instance, the name is "Mary", the player starts by naming ONE famous "Mary" in any category, real or fictional, like Mary Poppins. Play goes back and forth between all players/teams, each naming a new "Mary" each time.

As players begin to run out of famous "Marys", begin using the timer. If a player/team can't think of a new "Mary" within 30 seconds, they're out. The last player/team to name a "Mary" is a winner and has control of the die.

They immediately roll and move forward no matter what square they are on. If the winner loses on their next turn, control of the die moves to the left. It does NOT revert back to the order of play before the nameoff.

Note: at the beginning of your turn, you must roll if you are resting an a nameoff square from your last turn.

When you land on a namedrop square, chances are you'll have to name more than one famous person with the -name you pick! First, draw a card and read the name next to the chosen letter (ex. "George").

Now roll the die again. Lets say you roll a 3. You now have 30 seconds to come up with 3 famous Georges, in any category, real or fictional! If you succeed, roll, move forward and follow the directions for the next square.

If you do not succeed, control of the die moves to the left and, on your next turn, you must draw a new card, roll the die again and win this square before you can move.

Note: at the beginning of your turn you cannot roll if you are resting on a namedrop square. You must draw a new card and win that square before you can roll ahead.

Sometimes you're asked to Namesake someone like your boss or an opponent's father, etc. Here's how to play those names:

As usual, draw and read the card. When playing on teams, all team members must take turns reading the cards. For instance,

with "Namesake your Mother" it is the mother of the team member who is reading the card.

Sometimes opponents are asked to pick the player being namesaked. Here's what to do:


Play continues as usual: i.e.: if the player's boss' name is "Brian" then the name "Brian" is used on that square.

If you cannot do the personalized Namesake (i.e.: You don't have a: boss!), then pick a new player, or draw a new card and start again.

Sometimes you may get an unusual first name. That's just the luck of the draw. Better luck next time!

All it takes is one opponent to recognize and accept an answer! If the other players have never heard of your answer, they can either believe you and accept it OR they can ask for a new answer. Good luck and happy debating!


You Can Always Roll Backwards!

Lets say you can't seem to win on an "Athlete" square. Before your next turn, declare that you want to roll and move backwards. Do it and if you successfully complete the square you land on, you may roll forward and continue your turn.

The Top 10 Things you Need to Know

When you reach "The Final Namesake" (exact roll NOT necessary!) draw a new card. Example: you draw "Tom".

To win the game, you must name ONE famous "Tom" in any THREE of the six categories. (You do not have to pick the categories until you draw the card!) E.G.. If you answer Tom Cruise (Stars), Tom Sawyer (Fictional Characters) and Tom Petty (Musicians), you win.

You can only win the final Namesake square with a never-before-played name. If you draw a name that has been used before in the game, you must draw a new card.

For a more challenging ending, choose to name FOUR "Tom's" instead of THREE. 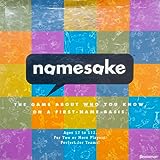 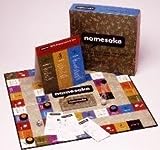