Make a reservation for ewww at the Monster Café!

Play cards to seat hungry monsters around tables filled with such revolting refreshments as Roasted Roadkill, Boiled Brains, and Stinky Sock Stew. But be careful as these monsters are extremely picky eaters.

Feed them what they fancy or else they may take a bite out of your score! Oh, and whatever you do, avoid the lemon sorbet!

We've never eaten at the Monster Café, but we imagine a diner's review might go something like this: "Gross has never tasted so good" at this popular new "dive for demons" where patrons drool over the latest innovations in "queasy cuisine".

While some say the menu can be "press your luck" and is "only for those with an iron stomach", the "fresh-off-the-floor" ingredients and "elegantly wretched" atmosphere combine for a culinary experience that literally "scares off the competition". Score the most points by collecting monsters and matching them up with their respective meals. But be careful not to take any monsters that end up going unfed as they will subtract from your score.

Note: These rules are for four players. Rules for two and three players are included at the end. 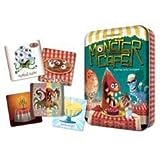 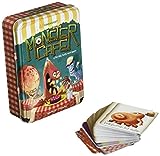