Mermaid Beach, a card game created by an eight-year-old, plays somewhat like a take-that version of Go Fish.

Each player starts the game with a hand of beach cards: these cards include four copies each of items like beach balls, sunglasses, umbrellas, and so on; a dozen mermaids/mermen; and seaweed, sneaker waves and a single sea monster.

A deck of shell cards - with cards worth 1-4 points and starfish action cards - is shuffled and placed on the table.

On a turn, a player can discard a mermaid/merman or matching pair of items to take the top shell card, discard a mean mermaid to steal another player's shell card, ask another player for an item card (a la Go Fish, drawing a card if you come up empty and scoring if you hit), play a sneaker wave to remove one opponent's shell card from play, or play seaweed to force someone to draw a beach card.

If someone collects a shell card that is worth points, that player places the card on the table; if the shell card features a starfish, every player passes one beach card left or right as instructed.

The game ends when a player has no cards left in hand or has only the sea monster in hand. In the latter case, this player must discard all of the highest-value shell cards that she has collected. The player with the most shell points wins. Collect the most shell points by playing Mermaids/ men or pairs of beach items to the discard pile. Who- ever has the most points when one player is either out of cards or holds only the Sea Monster wins. 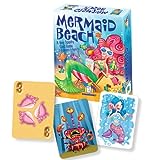