In Mental Blocks, players are racing against the clock together in real-time to build a specific, single shape in the center of the table, using the blocks provided, without showing other players their cards.

It won't be easy! Players can't show each other their cards, and could also have restrictions on what they can touch, how they can interact with blocks and other players, and what perspectives they can see. Ultimately culminating in a chaotic challenge of teamwork, clever thinking, and problem solving.

In case that isn't hard enough for you and your team, you could also choose to play with the Hidden Traitor Variant where one of your teammates is secretly working against you, trying to run down the clock, without being caught.

Mental Blocks has 60 puzzles of various difficulties; each of which can be played fully co-operative or with the tension inducing Hidden Traitor.

Mental Blocks features double-sided Perspective Cards that give each player their own unique view of the puzzle solution.

The Family Icon in the lower left corner and the top green border indicate the Family side. These puzzles are simpler to complete than the challenge side puzzles.

The Challenge Icon in the lower left corner and the top red border indicate the Challenge side. These puzzles are more difficult than the family puzzles.

The Puzzle Numbers are in the lower right corner. Here you see Family Puzzle 01, Card A. All cards labeled F01 belong to the same puzzle. Each puzzle will be comprised of 9 cards labeled A through I.

All Required cards are used each play, with the optional cards being used for higher player counts. The Required / Optional icons in the bottom left indicate if the card is Required (The checkmark) or Optional (The dashed circle)

Some Perspective cards include this Any Side Up icon. For these puzzles it means you have no idea which orientation is up or down, left or right for the puzzle, and adds an additional layer of complexity.

The green Good Builder icon in the top left lets you know that you are on the team attempting to complete the puzzle in time.

The red Traitor icon in the top right of the "I" card of each Puzzle Set will be used by the Traitor if playing the Hidden Traitor Variant, or as the answer key card if playing fully Cooperatively.

In the center of each Traitor card will be two isometric, full-color side views of the puzzle. These will double as both the answer key and the information available for the Traitor.

The two types of Perspectives

The center of each Perspective card, except card "I", will picture either a full-color, 2-dimensional view of one side of the shape your team is trying to build, or a grayscale, isometric view that does not include lines between individual blocks.

This is always a side view, never from the top down or bottom up.

Example: Molly has the Perspective card on the left.

She knows that when the puzzle is completed, from her perspective she will see a blue block above the yellow block, but she doesn't know if the blue is a square sitting on the yellow, or is actually a tall blue block sitting farther back with it's bottom half being blocked by the yellow block.

Nathan has the Perspective card on the right. He know that the finished shape will consist of 2 levels, and will have what appears to be 2 small squares on top of blocks in the base.

But doesn't know if those square shapes are squares siting on other blocks, or tall blocks.

The orientation of the blocks in the picture is true from the player's perspective. At the end of the game, the structure built needs to match each player's Perspective for the solution to be correct and the players to win.

These cards offer individual challenges for each player Note: They apply only to the player who drew the card and not to the entire table.

These cards are used to increase the difficulty when playing the expert or genius level.

The indicated Glitch Card is dealt face-up to the table and will be followed as a rule by all players, including the Traitor if also playing the Hidden Traitor Variant.

Step 1: Choose the puzzle that you wish to play

There are two recommended ways to do so.

Once you have selected a Puzzle to play, take all the cards with the corresponding Puzzle Number from the deck. Place the chosen play side face-down so you are looking at the opposite side of the cards.

For example, if you want to play Family Puzzle 01, this means the green side will be face-down and you will be looking at the red side that shows Challenge Puzzle 01.

Important: You should never look at the cards of the Puzzle you intend to play. Use the Puzzle Number, Required Card, and Optional Card icons on the opposite side of the cards to help with set up.

Now you can adjust the difficulty of the game based on player level and experience. Add these steps to the Setup based on your chosen difficulty.

Set a timer on a phone, watch, or other handy time-keeping item based on the below table.

Since triangles may appear square or rectangular from certain perspectives, either shape is correct if turning a triangle on its side does not contradict the information on any players' cards.

Effectively, because a triangle laid on it's side will appear identical to a square from all four, 2D side views on the Required cards, there are certain puzzles in the game that can be solved with either a triangle turned on it's side or a square block.

This solution is generally valid at lower player counts.

A square and a triangle on it's side appear identical from all 4 "side views".

Important: The Optional isometric grayscale cards provide additional information to players that may invalidate the "squared triangle" as a solution for a given puzzle by making it clear if a solution uses a triangle or a square.

If any active player has a card that is contradicted by the structure built then players have lost. This means solutions using the "squared triangle" may be valid at lower player counts but invalid at higher ones. Remember, communication it critical before a vote is called!

If this is anyone's first time playing the game, or you want a quick refresher, the quick start guide on the back of the rulebook is a quick introduction on how to play!

Once the timer starts, there is no time to waste! All play is simultaneous; there are no turns and players are free to grab blocks and start building. A few things to keep in mind:

If at any time a player believes the team has solved the puzzle correctly, they may call a vote. Players must stop building the structure when a vote is called, but do not stop the timer. All players who agree the puzzle has been solved should raise their hands.

If the majority of players agree that the puzzle has been solved, stop the timer and check the results of the puzzle using the Traitor card as the Puzzle Answer Key.

In the case of a tie in the vote, or when the majority of players disagree that the puzzle has been solved, play continues until another vote is called.

If they call a vote before time expires and the solution to the puzzle matches the structure built on the table exactly or is correct per the Squared Triangles solution.

The game is lost if time runs out or the solution did not match the structure built. 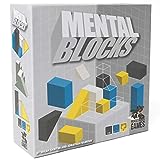