It is similar to a 3 player game, the third player being a neutral player. The first player will alternate between the 2 real players.

When the neutral player has a choice, it's the first player who will make the choice for him.

Don't forget to alternate the draft direction, as shown on the parchment used to count the turns.

appears on more than one card, then those cards are shuffled and one of them is chosen randomly and placed face down in front of the neutral player area.

Just like in the normal game, once the neutral player has taken a card, the remaining ones are given to the next player.

Reminder : If the neutral player has a choice, for example with a Jousts/Tournaments card, the first player makes the choice.

If the neutral player has a bonus on the Gallantry game board and has to choose where to move up, the first player makes that choice.

Coats of arms are given as if the neutral player was a real player. Reminder : in a 3 player game, the third place never gives you anything positive.

At the end of the game, you don't have to count the neutral player score, but if you want to, you can compare it to your own score!

Those rules replace the easy rules.

In this game, each player plays 2 different colors, as if it was a 4 player game. The score of a player is the sum of th e score of each of his colors. One player plays blue and green, the other plays yellow and red.

The order for phase 3 (playing the cards) is shown on the « Turn Order » card..

The first player shuffles the 52 Learning cards and deals 6 cards to each player.

Each player looks at his cards, and divides them into 2 stacks of 3 cards each (face down).

Once all 4 stacks are done, they are revealed (cards face up).

Each player now has 6 cards in his hand.

In the order shown on the « Turn Order » card, players play their colors. Playing a color means playing the 3 cards chosen for that color all at once, and move the discs on the game boards accordingly. 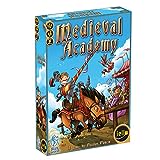