This section provides a brief overview of the many different types of cards in the core set.

There are five identity cards in the core set, with the hero on one side and the alter-ego on the other.

Each identity comes with a set of identity-specific cards that are used in a player's deck whenever that player is playing that identity.

Each identity also comes with an obligation card that is shuffled into the encounter deck whenever a player is playing that identity.

Each identity also comes with a nemesis set, which is set aside during setup whenever a player is playing that identity. During play, some effects may cause a hero's nemesis to show up and make trouble.

In addition to the identity-specific cards and the cards from the player's chosen aspect, basic cards may be included in any player deck.

There are three scenarios in the core set, each featuring a different villain. Each villain is represented by a sequential deck of one or more stages.

Each villain comes with one or more main scheme cards, which represent what the villain is trying to accomplish in that scenario.

Each villain also comes with a fixed encounter set, which is used as the foundation of the encounter deck whenever that scenario is played.

The core set has five modular encounter sets, which can be interchanged among different scenarios to vary the experience from one game to the next.

These preconstructed starter decks and character introductions are intended for the player who wants to immediately play the game without customizing their own deck.

The She-Hulk and Iron Man starter decks cannot be played at the same time from a single core set, because they share the Aggression aspect cards. If two players want to play both of these heroes together, we recommend replacing the Aggression cards in the She- Hulk list with the Justice cards from the Spider-Man list.

The Captain Marvel deck listed here is different than the deck used in the tutorial game.

Black Panther's power comes from highly advanced Wakandan technology. With his Black Panther upgrades, Black Panther can shred enemies and schemes alike, though assembling the necessary pieces can be tricky.

Before T'Challa takes his first turn, he can use his Foresight ability to get one of his Black Panther upgrades into play quickly, with The Golden City and Shuri helping to find other upgrades later.

With the Protection aspect, Black Panther's retaliate ability shines, allowing him to defend against enemy attacks and deal damage back in the process. Vibranium can be used to alleviate the high cost of two powerful allies, Luke Cage and Black Widow, and Med Team works well with Vibranium Suit to keep Black Panther in the fight.

While in Iron Man form, go Aerial using Rocket Boots, increasing Iron Man's capabilities to land a massive Supersonic Punch, survey the area with the Mark V Helmet, or blast enemies out of the skies with Powered Gauntlets.

With the Aggression aspect, pump Iron Man's attack power with Combat Training, then throw out a series of attacks with Arc Reactor. And if Iron Man gets overwhelmed, mow through minions big and small using Relentless Assault, Tigra, and War Machine.

Use energy resources to draw cards with Photonic Blast and her Rechannel ability, or store tokens on Energy Channel for a massive burst of damage.

With the Leadership aspect, call Hawkeye, Maria Hill, and Vision to assist Captain Marvel and Spider-Woman, then boost the attack and thwart power of those under her command with Inspired and Lead from the Front.

Spider-Man's power set makes him a versatile hero, able to respond to almost anything the villain can dish out. His high defense power, Backflip, and Enhanced Spider-Sense make him hard to hit.

If the villain does land a surprise attack, change back to Peter Parker and use Aunt May to nurse him back to health. For a grand finale, save up for a Swinging Web Kick to deal loads of damage to the villain!

With the Justice aspect, Spider-Man is able to even further control the villain's actions. For Justice! and Surveillance Team counteract impending threat , while Interrogation Room combos perfectly with Spider-Tracer.

And when the situation gets dire, utilize Great Responsibility to buy some time.

She-Hulk is all about sharing the limelight with her other persona, Jennifer Walters. Crush almost any foe with She- Hulk's high attack power, using One-Two Punch and Superhuman Strength to deliver even more devastating blows.

Focused Rage adds fuel to the fire, drawing her cards and magnifying the destructive force of Gamma Slam. When the enemies aren't a threat, flip to Jennifer Walters to work late nights at the Superhuman Law Division, or lock up criminals the traditional way with Legal Practice.

With the Aggression aspect, use Combat Training to enhance She-Hulk's fighting capabilities even further, or hulk out with her cousin, Hulk, to ruin the villain's day. As She-Hulk overpowers her enemies, Chase Them Down provides flexibility to stop the villain's dastardly deeds, while Tac Team allows her to concentrate her rage where it' s most needed.

The Marvel Champions: The Card Game core set is designed to offer significant replayability. After playing a few games with the preconstructed starter decks, players may want to explore their own strategies by creating their own original decks.


Why Build a Custom Deck?

Deckbuilding is a process by which a player may customize their deck with original strategies and ideas.

This allows a player to experience the game in new ways; instead of adapting to the strategy of a starter deck, each player may construct decks that play how they want to play. When players construct original decks, they don't just participate in the game: they actively change how it is played.

For many players who don't have much experience with customizable card games, deckbuilding can be an intimidating prospect. Instead of jumping in the deep end, start by modifying the starter decks listed on the previous two pages.

Try playing different heroes with different aspects to see how the various combinations change the feel of the deck.

After experimenting with some of the different hero and aspect combinations, you might find a pairing you particularly enjoy. As you continue to play with this deck, you may be inspired to further customize it to suit your play style.

At this point, you are ready for the full customization rules, which follow in the next section.

The following are the deck customization rules for player decks:


Beyond The Core Set

After exploring the customization options of the core set, hero pack expansions open a world of additional possibilities.

New heroes such as Captain America, Ms. Marvel, and Thor are on the way, and many of the aspect and basic cards in each of these packs can be used to customize any player deck. Collect them all and build the ultimate deck for all of your favorite heroes! 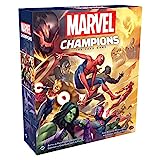