These colorful beverage coasters form a gameboard that changes during the game. Why the name Martian? Because the fictional origin of these pyramids is in the lost, ancient cities of the planet Mars.

Arrange the four coasters in a square. (Notice the small dot in the corner of each coaster: to maximize fairness, place the coasters together with all of these circles in the center).

Assign a color to each player. (Set the extra color(s) aside). Place the pyramids onto the coasters thusly:

The object of the game is to assemble your three pieces, in a Nest, in the center spot of the coaster which features the color of your pieces.

On your turn, roll both dice. The Treehouse die gives you a special Action (see chart), while the standard six-sider determines your Movement Points.

You may take your Action at any time during your turn, be it before, after, or in the middle of using your Movement Points. You may only move your pieces in the directions indicated by the arrowheads.

How far your pieces may go is determined by each piece's pip count. It costs three Movement Points to move your Queen one space, but only two to move a Drone one space, and Pawns cost one Movement Point per space to move.

You can only move your own color. A piece may not be moved if another piece is sitting on top of it, but a piece may be moved to the top of the stack it's in by spending the Movement Points needed to move that piece one space.

TIP - Totally Increase Points! Regardless of your other roll, you now have 7 Movement Points.

SWAP - Two coasters of your choice are swapped. (However, their orientations do not change).

HOP - Choose any coaster and move it to another spot. You may also freely rotate the coaster.

DIG - You may move as many of your pieces as you wish to the tops of the towers they are in.

AIM - You may freely rotate in place as many of the coasters as you wish.

WILD - Take your choice of the other five options.

Notes: You may not Hop in such a way as to cause any coaster to become disconnected from the rest of the group. It's OK to Hop to the same location, but in a new orientation (i.e. you can use your Hop to Aim a single coaster). Multiple Aim or Dig actions must be done at one time.

Your Treehouse Action is optional.

The first player to build a nest in the center of their coaster wins! It doesn't matter if other players' pieces are in your way; you can just build your Nest on top of any obstructions. (But you can't have other colors between your pieces). 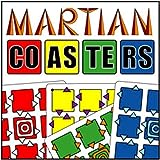