Carefully detach the Macroscope parts and tokens, the game round tracker and the marker from their cardboard surrounds. Assemble the Macroscope as shown in the picture below:

Assemble the marker as shown in the picture on the below.

Place the Macroscope in the center of the table. Take the deck of picture cards and place it in the Macroscope, so that the card with the pizza is the top card of the deck. Do not look through the cards, as it would spoil the fun! Cover the deck with the perforated lid of the Macroscope.

Make sure that the end with the a black arrow is visible. The arrow indicates the orientation of the picture on the card.

At random place a token in each round window of the Macroscope. Carefully (without turning the Macroscope over or accidentally pulling out any other cards) remove the top card of the deck from the Macroscope and place it in the small compartment of the game box.

The Macroscope must be visible to all players at all times!

Turn the Macroscope so you can see it well. The arrow on the card must be pointing away from you.

Remember: all players may peer into the windows of the Macroscope at any time during the game. Don't misplace the tokens when passing the Macroscope to another player.

Example: Simon starts. He rolls a "2" and a "5". He removes the left token with the number "2". Neither Simon nor other players are ready to guess. Then he decides to open another window and removes the right token with the number "5". He is not ready to guess, and neither are the other players. He takes 2 yellow crystals instead. He passes the dice to the player on his left.

If a player wishes to guess the picture, they must announce it to the other players and say out loud what they think is depicted on the card.

To challenge another player's guess, you must pay that player 2 yellow crystals and say out loud what you think is pictured on the card (you cannot repeat a guess that's already been made). If the active player refuses to guess the picture, follow the same steps. If you don't have 2 yellow victory point crystals, you cannot make a guess during another player's turn.

At random, cover all windows of the Macroscope with tokens (so you don't accidentally see the next picture card). Then, carefully remove the top card of the deck from the Macroscope (without turning it over) and take a look at the picture.

If a player doesn't have any victory points, they don't lose anything. If a player has fewer crystals than they must give up, they return all crystals they have to the reserve.

When you have finished scoring the round, carefully place the played card in the small compartment of the game box without looking at its back.

Then, move the marker on the game round tracker one space forward. The turn is then passed clockwise to the next player and the game continues by the same rules.

If all the windows in the Macroscope are opened before anyone guesses the picture, cover the windows with the tokens again, pull out the card and place it in the game box. Start a new round without moving the marker on the game round tracker.

When the marker reaches 10 on the game round tracker, play one final round. The player with the most victory points after ten rounds wins!

For an easier game, follow the basic rules with the following few changes:


Game storage and renewing the deck

The game box has two compartments: the small compartment is used to store the cards you've already played (in a deck with the played side up), while the big compartment holds the assembled Macroscope with all unplayed cards inside.

The first card in the deck is the one with a pizza on one side and the Macroscope logo on the other - it prevents you from seeing the pictures in the deck before playing!

When there are no cards left in the Macroscope, take the deck of discarded cards from the box, flip it over and insert it into the Macroscope, just like during the game setup. Cover the cards with the Macroscope's perforated lid.

Place a token in each of the Macroscope's round windows. Then, carefully (without turning the Macroscope over or accidentally pulling out any other cards) remove the top card of the deck from the Macroscope and put it away in the box. Now you're ready to continue the game! 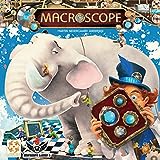