Get rid of the cards in your Ligretto Stack before your opponents by quickly placing cards of the same color in numerical order on the piles in the center of the table!

Sort the cards into 4 decks of 40 cards determined by the pattern on the back of the cards (spheres, pyramids, cubes and crystals).

Give each player a deck of 40 cards. Each player should note the pattern and color on the backof their deck, which remains their deck for the entire game. Players shuffle their decks.

Players then deal out their own deck in the following fashion:

The game play of Ligretto is simultaneous. In other words, there are no player turns. Players play cards to the table as fast as they can and at the same time.

One player shouts",Ligretto!"to begin the round. Players then begin playing cards from their Row or their Hand, creating Piles in the middle of the table.

Each Pile must begin with a 1 card and continue in numerical order until the Pile has 10 cards of the same color. The card play follows these simple rules:

As soon as a player has no more cards left in their Ligretto Stack, they shout, "Ligretto stop!" No more cards may be placed on Piles at this time, and the round ends.

As soon as a round ends, players' Rows and Hands are set aside, but their Ligretto Stacks must be left in place.

All the cards in the Piles in the middle of the table are then sorted into their respective decks, according to the patterns on the back of the cards.

The first player to reach 99 points is the winner.

If more than one player scores 99 points in the same round, the player with the highest total score wins.

Additional cards may be placed on the Row from the Ligretto Stack and the Hand but only in decreasing order.

For instance, an 8 may be placed on a 9 or a 4 on a 5. Contrary to the cards in the middle, alternate cards on the Row must be differently colored. For example, a green 9 may be placed on a yellow 10, but not a blue 5 on a blue 6.

Note: be careful not to place too many cards in the row otherwise you might not be able to fill the gaps in the row with cards from the ligretto stack.

Each boxed set of Ligretto contains enough card decks for 2-4 players. For some real Ligretto mayhem, combine all three boxed sets from Playroom Entertainment for a total of 12 Ligretto players! 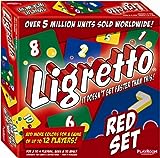 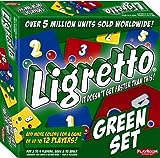