Players are stock brokers during the second Industrial Revolution, trying to make as much money as possible while also coming across as good citizens by donating money to charity.

During the course of the game, players purchase or sell shares of stock, and then manipulate the stock prices with the cards that they share with their two neighbors.

Additionally, players donate stock to charities, which is sold off at the end of the round for the charitable donation.

Whoever donates the least to charity by the end of the game automatically lose, no matter how wealthy he's made himself.

The player who makes the most money at the end of the game is the winner, provided that he or she is not the person who donated the least to charity. However, personal wealth is not all it takes to rise to the top. Hie barons also have a reputation to uphold! In order to gain a well-respected reputation, barons must be unselfish with their donations to charity. The selfish baron that donates too little of his hard earned wealth is out of the running for top baron, regardless of his personal fortune. â€¦ 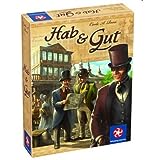