Create words to gain points, and use as many of your opponents' letters as you can to cause them to lose points!

Set the Game Disc out in the middle of the playing area. Attach the Red Word Marker by clicking it into place along the bottom ridge.

Place all of the Letter Tiles in the Storage Bag and shake it up!

Randomly remove 24 Letter Tiles and place them face up in the center of the Game Disc.

Each player chooses a color Peg Pawn and places it in the first hole of their color path (the far left hole) on the Game Disc.

For example, if the previous player spelled BAG, depending on what letters you have to choose from, you could use the G to spell GOOD, or the AG to spell AGAIN, or you could use all letters BAG to spell BAGEL.

Just adding an S to a word is frowned upon-there's no real fun in that! Unless, of course, it was available to the previous player and they overlooked it! So, watch out for those S's!

Any word that can be found in a standard English dictionary is allowable.

Foreign words are allowed only if they are found in the dictionary, meaning they are used regularly in the English language.

The first player to move their Peg Pawn to the other end of their color path, scoring 20 points, wins!

You may want to think ahead when spelling your word...maybe spell something that has a letter(s) at the end that makes it more difficult for the next player to take points from you. One way to do this is to pluralize words when you can! 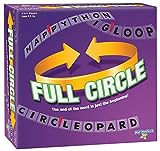