Upon hearing a given situation, each player is invited to choose, among the potential emotions, the one that he/she feels closest to. Next, the players must wager on his/her partner's emotion.

The aim of the game is to correctly guess one's partner's emotion. The Emotion track will reveal your insight and understanding of the other players.

1 Place the Emotion track in the middle of the table.

2 Choose a color and take:

3 Take Partner cards according to the number of players, keeping in mind the organization of teams.

For example, with 5 players take one pair and three identical Partner cards:

You may of course play with the deck of your choice in any given context, but it is advised to take into consideration the suggested ages. Otherwise, it is also possible to play with several decks at once.

Shuffle the deck you have chosen and put it to the side of the playing area. Put the remaining cards back in the box, they will not be used for this game.

5 Separate the 25 Emotion cards into three decks according to the symbols on the back:

6 Choose a first player, henceforth known as the Master of emotions.

One round is divided into 9 phases strictly played in this order.

1 The next Master of emotions is selected, playing clockwise (this step is excluded in the first round).

2 The Master of emotions reads aloud all new emotions and makes sure that every emotion is understood by all players.

3 Situation. The Master of emotions takes one Situation card, then chooses one of the three propositions and reads it out loud to the others. If no situation suits the Master of emotions, he/ she can put the card back on the bottom of the deck and pick a new card. It is only possible to change cards once.

4 Personal Emotion. Every player, including the Master emotions, chooses a number, among his/ her Vote cards, corresponding to the best emotional response in the given situation. The Vote card is then placed face down in front of each player.

5 Team. The Master of emotions shuffles the Partner cards and deals them face down to each player. They are immediately shown and indicate this round's partners.

Example: with 7 players, there will be a team of 3 and two teams of 2.

For an introductory game or if the players do not really know each other, we suggest you play one round without partners. Everyone will show the j emotion they have chosen without betting on another player. In this case, skip phases 5 and 6.

Skip this phase for a 3 player game.

6 Partner's emotion. Every player chooses a number among his/ her Vote cards to try to match the number chosen by his/her partner during phase 4. If the player believes his/her partner has chosen the same emotion the «

The Vote card is then placed face down in front of this round's partner.

Feel free to look your partner in the eye before making your decision.

With 3 Players: In a 3 players team, everyone guesses the emotion of the partner sitting to his/her left.

Example: Cecile, Elsa and Herve are a team for this round. Cecile will have to guess the emotion chosen by Elsa (who is on her left in clockwise order). Playing clockwise, Elsa will guess Herve's and Herve, Cecile's.

With a 3-player-game, change partners every other turn.

Tip: before your choices are revealed, it may be useful to read the situation once again as a reminder.

1 You guessed your partner's emotion correctly but your partner made a mistake (or the other way around): you win one point each on the Emotion track.

2 You and your partner guessed each other's emotions correctly: you win three points each on the Emotion track.

3 Neither you nor your partner have guessed the other's emotion: no points are won and your tokens do not advance).

Herve does not guess Cecile's emotion but still wins 1 point due to Elsa guessing his emotion.

If desired, the Master of emotions may choose one Emotion card he/she wants to change. If so, he/she must discard the card (it will not longer be available for this game) and replace it with a new card that has the same symbol on the back.

Example: You can only exchange a «

»cards, this category can no longer be changed.

Taking into consideration the spirit of the game, make sure at least one full round is played per player so that everyone has the opportunity to be the Master of emotions (first player).

With 3 or 4 players, we suggest you play two full rounds per player. If you play without counting each round, the first player to reach the last square of the Emotion track ends the game. 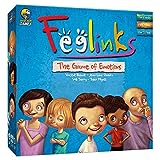 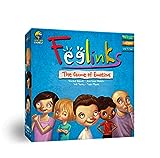