The object is to score the least points by getting rid of your cards before your opponents.

Write each player's name on a piece of paper so that a running total can be kept of the scores.

Shuffle and deal five cards to each player. Place the remaining deck face down to form a draw pile. The top card of the draw pile is turned over to begin a discard pile.

Note: if a 'special card' is turned over to begin the discard pile, tuck it back into the deck and draw a new card.

Starting with the person to the left of the dealer, players take turns matching the card on the discard pile, either by color or by type of fart. Unlike some card games, there is NO need to discard a card just because you are able to. You may choose for strategic reasons to hold onto a card for future use.

When playing the card you MUST make a fart sound (by any means) that matches the type of fart on the card (or say the name instead if you are bashful). For example, a Teeny Weeny may be a short squeak, while a Wet Rasper could be a slobbery squelch. Failure to make a fart noise results in a player having to pick up two cards as a penalty!

If you cannot place a card on the discard pile, you must take a card from the draw pile. If you draw a playable card, you may play it immediately, but only if you wish.

If the draw pile is used up, leave the top card from the discard pile and shuffle the other cards to form a new draw pile.

The moment you discard your second to last card, you must yell 'LAST FART' before the next player picks up or discards a card. Failure to say 'LAST FART' results in a 4 card penalty. But only if you are called out!

After this card has been discarded, the next player misses their turn.

If however, this player has their own Pass the Wind card, they can play it now, and the next player misses their turn instead.

These cards may only be played on a matching color or on another Pass the Wind card.

This card reverses the direction of play.

Play to the left changes direction to the right, and vice versa. These cards may only be played on a matching color or on another Silent But Deadly card.

After this card has been discarded, the player may swap their hand with any other player.

The person who had their cards swapped resumes play, taking the next turn. The player discarding a Barn Burner card does not need to swap hands with someone else, if they feel it is not in their interest to do so.

These cards may only be played on a matching color or on another Barn Burner card.

After this card is discarded, the next player must draw 2 cards AND miss their turn.

If however, this player has their own Butt Trumpet card, they can play it now to avoid both the pick-up penalty and the missed turn. The penalty is cumulative and is increased by 2 more cards for the next player.

These cards may only be played on a matching color or on other Butt Trumpet cards.

After this card is discarded, the next player must draw 3 cards AND miss their turn. They cannot escape the penalty by playing another Thunder Pants card and MUST take the penalty unless they have a Gas Mask card - see below.

The player who discards this card chooses the color to continue play.

You can also play the Gas Mask card on any other card, where it has no effect. This card does NOT reverse the direction of play. The player who discards this card chooses the color to continue play.

The first player to get rid of their cards gets zero.

Other players earn points for the cards left in their hand. Keep track of each player's score on a piece of paper. Points are awarded as follows:

Write each player's score beneath their name.

When one player reaches 200 points, the game is over and the player with the lowest score wins the game. 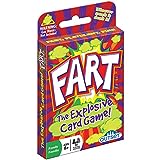