A great era of peace and prosperity between nations has bloomed into a period of unprecedented scientific advancement and exploration.

As one of the world's greatest aerospace engineers and a budding entrepreneur, you have founded an organization dedicated to exploring the distant and uncharted reaches of space.

To that end, you have secured prime location for your business at Farlight Station, Earth's great hub for extraterrestrial enterprise. You've begun to design a new class of ship that will help support interplanetary exploration, colonization, and research initiatives.

New discoveries and lucrative opportunities await you among these newfound stars, but other like-minded entrepreneurs have also been enticed by these opportunities and are gearing up to complete these missions first. You'll need both speed and savvy to stake your claim and forge the future according to your design.

In the near future, talented space corporations and agencies set out to explore, mine, and colonize outer space.

Your organisation will compete to design the most efficient and powerful spacecraft, to gather scientific knowledge, construct facilities on distant worlds, and transport colonists to the farthest reaches of our Solar System.

Charge up the monster rocket boosters, crew up, and race for space!

Each turn players will make bids for spacecraft module designs or missions, and assemble spacecraft designed to complete missions of increasing difficulty. The game is for 2-5 players, and plays in around 45 minutes. In Farlight, you'll work to establish your organization's influence over recently discovered but yet untapped regions of space by scoring the most points over a series of rounds. Players earn points by installing new parts to upgrade their ship and then launching that ship to complete missions to establish your dominance. â€¦

The administrative prowess of Exocorp is undisputed-everything runs smoothly, projects are always on budget, and idle time has been almost completely eliminated.

The secret, it seems, is that the leadership of Exocorp has replaced personal desire with a profound collective will.

The needs of Exocorp's workforce are always considered; every relationship is closely monitored for healthy patterns, neural implants echo a steady stream of daily priorities, and time for creative activity is structured into the quarterly regimen. Clear and well-communicated expectations are the foundation of joy. â€¦ 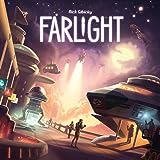